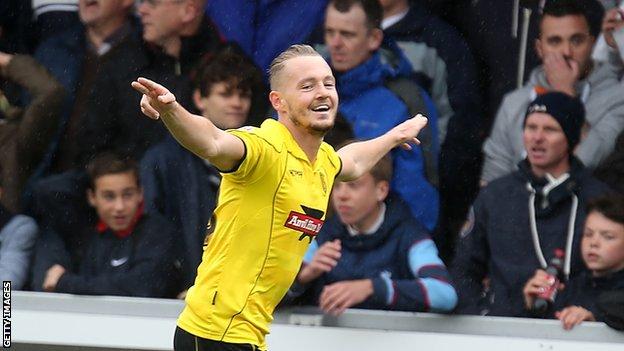 Burton Albion will take a slender lead into the second leg of their play-off semi-final against Southend, despite playing for half an hour with 10 men.

However, the home side were reduced to 10 men on the hour mark when Ian Sharps was sent off for two bookable offences.

The first half was an open affair with chances for both sides.

Burton were beaten at the semi-final stage last season, losing 5-4 on aggregate to Bradford, while Southend lost to Crewe 3-2 on aggregate at this stage two years ago.

Lee Bell flashed a shot over for the home side on 20 minutes, while Lyness had to be aware to stop Will Atkinson's snap half-volley 10 minutes later.

McGurk then turned and dribbled past several Southend defenders and sent a low right-footed shot towards the bottom corner, but Bentley dived low to his right to push the ball away.

But the Brewers went in ahead at the break as McGurk played a one-two with strike partner Kee and showed composure to clip the ball over Bentley.

The flow of the game was disrupted early in the second half, with a torrential downpour at the Pirelli Stadium making conditions difficult for both teams.

The dynamic of the game changed with half an hour remaining when defender Sharps was dismissed for two bookable offences within two minutes.

First, the 33-year-old centre-back was cautioned for handball when the ball appeared to strike him on the chest, but he could have had few complaints about his second booking after he tripped Southend's Ryan Leonard as the midfielder was advancing on goal.

Despite the extra man, the Shrimpers initially found it difficult to create any clear-cut opportunities as Burton defended doggedly.

The Shrimpers beat Burton 1-0 at Roots Hall on the final day of the regular season.

Southend did finally spark late on, with Kevan Hurst forcing Phil Edwards to head over his own crossbar.

Southend had late claims for a penalty as Callum McFadzean slid in to tackle Egan on the edge of the area, but referee Oliver Langford waved them away.

Lyness was twice more called into action by Leonard in stoppage time, bravely claiming the midfielder's low cross and then collecting his downward header.

Southend lost at this stage of the play-offs two years ago and Phil Brown's side have work to do in Saturday's second leg at Roots Hall if they are to reach the Wembley final.

"I thought in many ways there was a lot of good things about the game.

"The goal was a fantastically worked goal, probably the first real bit of composure we showed. Early on, I think the occasion made us a bit nervous and a bit edgy.

"We've suffered a massive blow which we need to sort out and recover from in Ian Sharps getting sent off.

"I felt the second card was played for a little bit, but yes, ok, a yellow card. The first one has hit him on the top of the chest, so how you give a yellow card and send Sharpsey off for those two incidents?"

"We feel they got lucky with the goal, it's a ricochet and it drops into the kid's path. He's finished quite well, fair play to him.

"I think that's probably their only real chance. You look at the chances we had, certainly the goalkeeper made a good save from John Egan late on.

"I know they went down to 10 men for the last half an hour, but the possession we had, without really having that final cutting edge, it was missing today.

"It's never easy playing against 10 men. They sit back and they try and soak the pressure and hit you on the break."