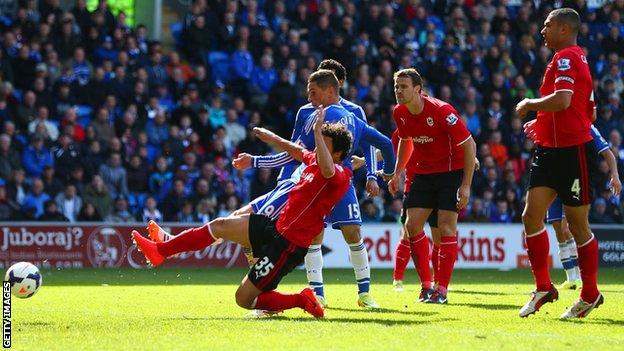 Below-par Chelsea finally struck back in the 72nd minute when Schurrle fired a rebound high into the net after David Marshall's save from Azpilicueta.

Torres's 11th goal of the season from six yards completed the comeback.

The result meant Chelsea finished third, but without a trophy for the first time in three years, while their 82-point total is their worst under manager Jose Mourinho who complained this week that they lacked a striker with "killer instinct" and after making six changes, watched his side toil for much of the game.

Meanwhile, Cardiff's first season back in the top flight after 51 years ended with them rock bottom of the Premier League, and the 2013-14 campaign was summed up as they struggled to deal with the visitors' greater quality, in spite of Chelsea's lack of penetration.

The day began with Cardiff owner Vincent Tan telling BBC Sport he was prepared to reconsider his decision to change City's colours from blue to red - provided they get back into the Premier League.

Cardiff have not beaten Chelsea since February 1963. In the intervening years they have drawn one and lost five meetings with the London club

The fans made their feeling known by singing "We'll always be blue" before kick-off and hurling blue balloons onto the pitch, though it was the team playing in blue who prevailed.

Chelsea, captained by Ashley Cole on what may be his last appearance for them, should have been a goal up inside five minutes as Torres latched on to a mistake by Steven Caulker but having rounded goalkeeper Marshall and negotiated a crowd of blue balloons, the Spaniard saw his goalbound shot cleared off the line by Caulker.

Mohamed Salah and Oscar also wasted good chances after Bellamy - also possibly playing his final game for his club - had put Cardiff ahead, after which Schwarzer was rarely tested.

Chelsea were brighter after the break, with Salah posing problems as Eden Hazard threatened to open up the Welsh club's defence.

The equaliser came when Marshall, Cardiff's player of the season, was beaten by substitute Schurrle, while Torres's short-range finish three minutes later ended Cardiff's resistance and condemned them to 20th place.

For both clubs, the rebuilding starts now, as Cardiff boss Ole Gunnar Solskjaer contemplates his first experience of the Championship.

"The performance was better than the result because the team played well from the first minute.

"The game was always in our hands and at half time the result is unbelievable because they didn't have a shot and they scored a goal.

"We were balanced to attack, playing good football and it was good because we played well, we won and not one of the boys goes to the World Cup with injuries, because we're always afraid of that."

Cardiff City boss Ole Gunnar Solskjaer: "There's been loads of positives in many games, but today was another confirmation for me that when we stick together we're hard to beat and create problems.

"What we've struggled with sometimes this year is the quality to come back in games we've had to chase games and that's something we have to look at next year.

"It's very disappointing [to lose] because for the lads and the fans to come away with something today would have been a great boost for everyone."