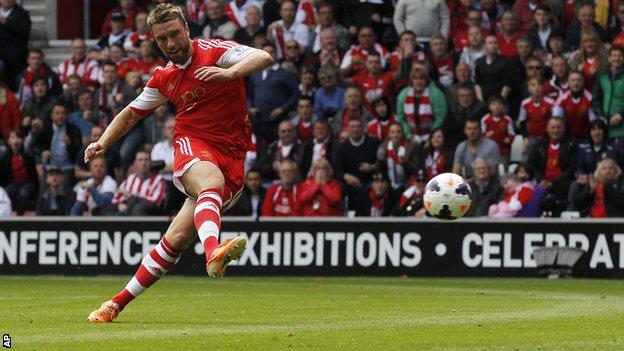 Manchester United will be absent from European competition for the first time in 25 years next season as a draw at Southampton saw them finish their worst Premier League campaign in seventh.

Tottenham's 3-0 win over Aston Villa would have denied United a Europa League place whatever the result.

Rickie Lambert shot Saints in front, with United claiming Nemanja Vidic had been fouled in the build-up.

Juan Mata equalised with a curling 25-yard free-kick in the second half.

The match is expected to be Ryan Giggs's last as interim United manager, with Louis van Gaal expected to take over at Old Trafford.

The game, watched by England manager Roy Hodgson, marked a final appearance for United captain Vidic, who will join Italian side Inter Milan on a free transfer.

With uncertainty surrounding the future of players from both sides, as well as that of each manager, it provided an intriguing finale to the season.

Hodgson would have been impressed by Southampton's England contingent, all of whom played their part in a dominant first half.

Adam Lallana and Luke Shaw both had early chances for Mauricio Pochettino's side while Vidic was lucky not to concede a penalty when he handled in his own penalty area as Lallana tried to control a bouncing ball.

But Saints eventually took the lead against the deposed champions through another of their England internationals, striker Lambert, with a controversial goal.

He emphatically fired past De Gea, having earlier won an aerial battle against Vidic and Rio Ferdinand, and although United claimed Vidic had been fouled in the build-up Southampton were in front.

They fully deserved to be ahead against a poor United side who missed the midfield craft and composure of Michael Carrick, who was only on the bench, as well as the presence up front of the injured Wayne Rooney.

The visitors ended the half without a single shot on target as Giggs, who was placed in temporary charge following the sacking of David Moyes, cut a helpless figure on the touchline.

His response was to introduce Carrick at half-time, with Shinji Kagawa hauled off, but it was another of their midfielders who got United back in the game.

After Victor Wanyama was booked for a kick on Danny Welbeck, United were presented with a free-kick 25 yards out and Mata curled the ball over the wall to leave home goalkeeper Artur Boruc with little chance of saving it.

Welbeck then headed over from six yards and Darren Fletcher nodded wide from close range as United finally enjoyed some momentum.

But their inability to find a winner means United finish the season 22 points behind Manchester City, who take the Premier League title from their neighbours, just as United had done 12 months before.