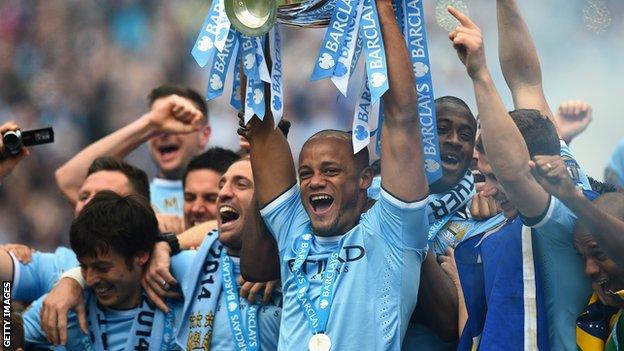 Manuel Pellegrini's side knew a point would confirm they had regained the crown - but goals either side of the interval from Nasri and Kompany ensured the formalities were completed with barely an anxious moment in front an ecstatic packed house at Etihad Stadium.

Liverpool's home defeat to Chelsea and the late collapse at Crystal Palace opened the door for City and they took advantage ruthlessly by winning their last five games.

And for 60-year-old Chilean Pellegrini, it marked a triumphant conclusion to his first season in charge after he was brought in to replace sacked Roberto Mancini and entrusted with returning the title to the club.

With 102 league goals and that two-point final margin, no-one can begrudge City a success that is richly merited, for all Liverpool's efforts this season.

As referee Martin Atkinson sounded the final whistle and confirmation of the title, City's fans rushed on to the pitch in their thousands and celebrated before retreating to allow captain Kompany to lift the trophy once more.

"As good as he has been, Yaya Toure is not the only reason City are champions. Players like Martin Demichelis, Edin Dzeko and Joe Hart, who were unpopular, out of favour or out of form earlier in the campaign, have emerged to make the difference."

City's fans also paid tribute to their quiet manager who has guided them to the title, while also claiming the League Cup - a more than healthy return and justification of his appointment by the club's Abu Dhabi-based owners.

Pellegrini insisted City would not simply go in search of the draw that would ensure they finished ahead of Liverpool barring a miraculous turnaround on goal difference, and so it proved as they pressed forward from the kick-off.

West Ham, with growing speculation that manager Sam Allardyce was taking charge of his final game, showed a desperate lack of ambition and frustration threatened to be City's biggest enemy.

They played, however, with the maturity and control of champions and no hint of the nerves that plagued them when they were last in this position and needed Sergio Aguero's winner with virtually the final kick of the season to snatch the Premier League away from Manchester United two seasons ago.

And that nerve-shredding experience served them well here as they played a game of patience when confronted by West Ham's blanket defence and simply kept possession until they could make their quality count.

The time came six minutes before the interval when Nasri's low shot from 20 yards beat West Ham keeper Adrian to release any tension that may have been lingering.

And the job was done four minutes after half-time when, fittingly, captain Kompany turned in from close range after a corner had rebounded off the back of Edin Dzeko.

All that remained was for City to close out the win which, despite Liverpool's win against Newcastle United at Anfield, was done at a stroll as the Etihad celebrating the reclaiming of the Premier League title.