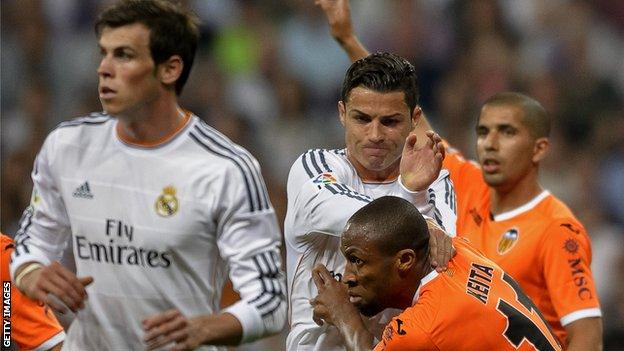 Cristiano Ronaldo scored a dramatic late equaliser to rescue a draw for Real Madrid against Valencia.

The hosts fell behind when Jeremy Mathieu nodded in but Sergio Ramos levelled with a header on the hour.

However, Carlo Ancelotti's side have a game in hand on both Atletico and Barcelona, who are two points ahead in second.

Real have three games remaining and will take the title if they win all of them and Atletico lose one of their final two fixtures.

Atletico's surprise 2-0 defeat at Levante earlier on Sunday has thrown open the title race once again and, perhaps buoyed by that result, Real attacked straight from the outset as Karim Benzema swiftly flashed a header over from Gareth Bale's deep cross.

But their attacking intent almost proved costly as they momentarily forgot their defensive responsibilities. Valencia midfielder Parejo was left unmarked in the Real penalty area to meet a right-wing cross, but his header was too close to Real keeper Diego Lopez, who tipped the ball on to the crossbar.

Despite that scare, Real continued to attack, with their front three of Bale, Ronaldo and Benzema looking dangerous on the counter.

It was from one such swift push into the Valencia half that Ronaldo went close to grabbing the opener as Benzema poked a pass through the defence for the Portugal forward, who struck a fierce first-time drive that visiting keeper Diego Alves did well to save.

It looked as though they would have to be content with going into the break level but Valencia stunned the Bernabeu when they took the lead a minute before the break.

Parejo drove a corner into the box where Mathieu was on hand to flick a header into the back of the net.

Unsurprisingly, Real came out strongly after the restart as Angel Di Maria shot wide before Ronaldo saw his goalbound effort pushed away by Alves.

The Valencia defence was finally breached midway through the second half as Ramos, who scored twice in the Champions League semi-final win over Bayern Munich in midweek, powered in a header from close range after Ronaldo had nodded the ball back across goal.

But the home crowd's celebrations had barely settled down when Valencia swiftly regained the lead. Sofiane Feghouli's cross found Parejo, who kept his cool to drill a first-time finish low into the corner.

Real upped the tempo in the closing stages as they desperately searched for an equaliser.

Ronaldo's driven free-kick was saved, before Alvaro Morata sent an effort over the bar.

And with seconds left, Di Maria hit a cross into the area and Ronaldo improvised superbly, sticking out a boot to flick the ball into the net and keep Real right in the title hunt.