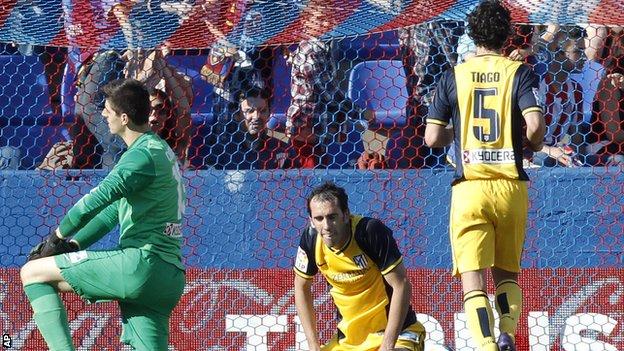 Atletico Madrid's bid to win La Liga for the first time since 1996 took a blow as Levante beat them to give Real Madrid and Barcelona renewed hope.

Atletico improved after the break but their defeat was sealed when David Barral coolly struck from eight yards.

But their lethargic loss at mid-table Levante has the potential to throw the three-way title race open once again.

Atletico know they cannot be caught by either Real Madrid or Barcelona if they earn at least a win and a draw from their final two matches. They host Malaga next weekend before going to Barca's Nou Camp on the final day.

Third-placed Real, who drew 2-2 against Valencia later on Sunday, are five points behind Atletico but have a game in hand, although Atletico would be crowned champions if the teams finish level on points given their superior head-to-head record.

The wall of Navas

Barcelona, who are second, are three points adrift of the leaders, with both sides having played 36 matches. The Catalan club could pip Atletico on their head-to-head record if they beat Diego Simeone's men on 18 May.

Atletico, who will meet city rivals Real in the Champions League final, lacked their usual spark and energy as Levante frustrated them from the first whistle.

The Valencia-based side took an early lead when Filipe Luis diverted Diop's set-piece out of Atletico keeper Thibaut Courtois's reach and into the bottom corner.

Simeone made a double substitution at half-time, introducing winger Ardan Turan and forward Adrian, as he attempted to inject some life into his side.

His players responded with a much-improved display in the opening exchanges of the second half.

Turan was the main threat as Atletico upped the tempo, seeing two low shots blocked and sending an eight-yard header over.

Top scorer Diego Costa had few clear-cut opportunities, but the Spain international was inches away from connecting with substitute Diego's in-swinging free-kick at the far post.

Levante were carrying little threat, but punished Atletico's profligacy midway through the second half.