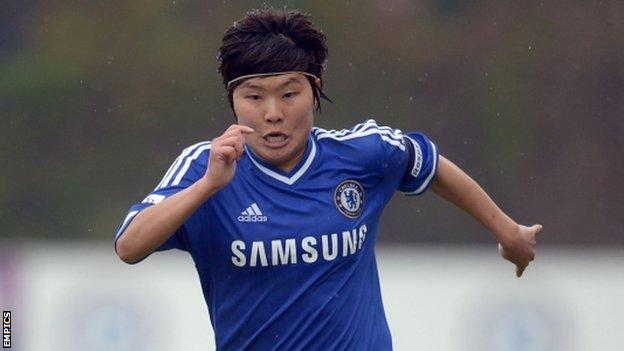 In the same group, Millwall drew 1-1 with Reading at the Den.

Chelsea continued their fine start to the season with a comfortable win against Women's Super League 2 opposition.

Watford threatened in the early stages, but Chelsea were always in control after striker Eni Aluko's 18th-minute cross led to a Cally Rowell own goal.

Watford midfielder Kate Natkiel reduced the arrears with a 34th-minute close-range shot, but three minutes before half-time So-Yun headed in her first before grabbing a second six minutes after the break.

Millwall took the lead in the 28th minute when striker Kim Stenning's powerful shot took a deflection off a defender to cross the line.

Winger Gemma Davison put Liverpool on the road to victory over the Black Cats with a spectacular 25-yard drive after three minutes.

Davison then sent in a 19th-minute cross that was turned into the net by German defender Corina Schroder.

Dowie opened her account with a glancing 20th-minute header and doubled her tally with a shot on the turn five minutes later. The England striker then produced a solo run and cool finish to complete her hat-trick 17 minutes into the second half.

Isabel Christiansen and Krystle Johnston both went close for City in the first half.

The game was heading for a draw when Christiansen's 89th-minute free-kick was turned in by Natasha Flint.

The visitors took the lead through a 19th-minute Sue Smith penalty.

After both goalkeepers had made good saves either side of half-time, the visitors went further ahead through Emma Johnson's 61st-minute diving header.

Durham pulled a goal back when midfielder Caroline Dixon got the final touch after a 69th-minute Jessica Round corner hit the post.

But Dixon then conceded an 87th-penalty that striker Jess Sigsworth struck home for the clincher.

The Magpies took the lead through a superbly struck 25-yard volley from striker Jess Clarke after 28 minutes.

The home side continued to press, but they were caught eight minutes after the break when a Laura del Rio cross was converted by Nikki Watts.

Bleazard then sent in the 27th-minute corner from which Laura Bray headed in the second goal of the afternoon.

Villa improved after the break and were unlucky when Lauran Walker's 72nd-minute cross-shot came back off the bar.