Norwich's interim boss Neil Adams has said his team must rely on good fortune if they are to avoid relegation.

I was tempted to put two strikers on but what you don't want to do is give the ball away because if we'd lost we would have been relegated, virtually

The Canaries drew 0-0 with Chelsea, but must beat Arsenal on Sunday and hope Sunderland lose their last two games if they are to stay in the Premier League.

"We need a bit of luck," said Adams, whose team remain in the bottom three.

"We shouldn't be where we are. Hopefully things go our way and we have to make sure Sunday's game is a fantastic occasion."

Norwich ended a run of eight successive away league defeats with a goalless draw at Stamford Bridge and a thumbs-up to the fans from Adams at the final whistle suggested the Canaries still believe, but their chances of survival remain slim.

The first point of Adams's tenure still leaves Norwich two points adrift of safety, having played a game more than Sunderland and West Brom, the teams immediately above them.

Even if Norwich beat Arsenal at Carrow Road next Sunday, Sunderland's superior goal difference means the Canaries must hope the Black Cats lose their remaining two matches - against West Brom on Wednesday and Swansea on Sunday - if they are to extend their stay in the top flight.

But Adams praised his players' character in a match that dented Chelsea's title ambitions.

"It keeps us going for sure," he added. "I thought the performance was outstanding. We had a game plan and virtually executed it to perfection. 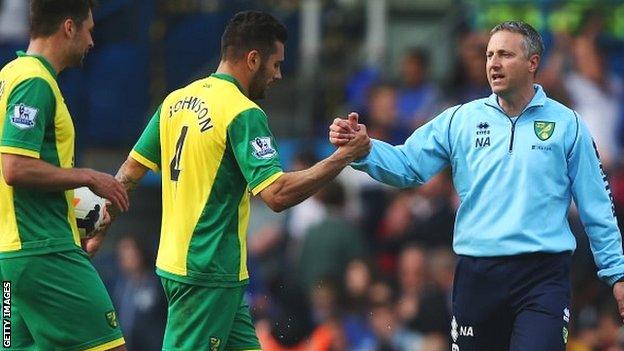 "We were so strong, so solid. Of course, we would have liked to cause Chelsea one or two problems more, but you're playing against one of the best sides in Europe."

Adams was criticised by some for not being more adventurous against Jose Mourinho's men when victory would have improved their chances of survival.

"I was tempted to put two strikers on but what you don't want to do is give the ball away because if we'd lost we would have been relegated, virtually," responded Adams.

"What we hope is that we go to the Arsenal game with an opportunity because with that sort of commitment and sprit we have a chance."