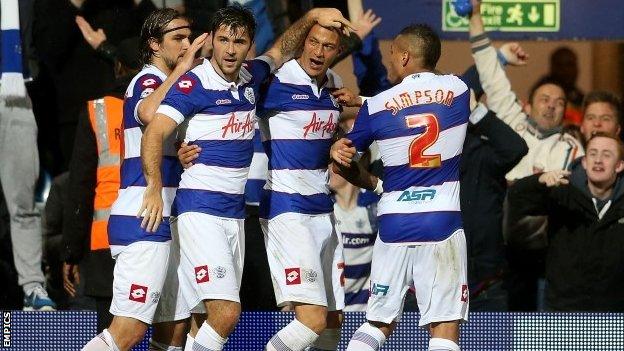 QPR came from behind to defeat Wigan and book a place in the Championship play-off final against Derby on 24 May.

Charlie Austin's goal in the first period of extra-time sent Harry Redknapp's side to Wembley, where they will be one game away from an immediate return to the Premier League.

Wigan had taken a first-half lead through James Perch, who found the net from close range.

But Austin levelled from the penalty spot in the 73rd minute before his close-range finish in extra-time sealed victory.

That was the striker's 19th strike of the season in Rangers colours following his £4m move from Burnley in August - and one that could be worth millions if Rangers do end up winning promotion.

However, they will have to overcome an in-form Derby side, who finished third in the league and won their semi-final with a 6-2 aggregate score over Brighton.

After the cagey first leg of this semi-final finished goalless, the tie was evenly poised heading into the return at Loftus Road.

But after an early chance for QPR from Gary O'Neil's half-volley from the angle of the area, it was Wigan who scored first and stunned Loftus Road into silence.

Referee Mark Clattenburg played an intelligent advantage in the build-up and James McClean's whipped cross was tapped home by Perch from three yards after he nipped in front of Clint Hill.

Wigan were in the ascendancy but Rangers boss Redknapp pushed Kevin Doyle up front alongside Austin and the home team found their feet and came back into the match.

The recalled Niko Kranjcar was at the heart of things and forced a fine one-handed save out of Scott Carson after a decent spin and drive from 20 yards.

Wigan were lucky to hold on to their lead when Austin's header from Joey Barton's corner was cleared off the line by McClean before hitting Nedum Onuoha in the face and flying behind.

The away side just about held on for half-time in what was a full-blooded 45 minutes of football that saw O'Neil lose a tooth after an accidental collision.

Kranjcar continued to probe the Wigan goal after the restart, this time seeing a fierce volley from 20 yards charged down by Shaun Maloney, while Junior Hoilett was next to test Carson with a teasing cross-cum-shot.

As QPR pressed forward, they left space at the back and McClean almost made them pay.

He found himself one-on-one and with a brilliant chance to double Wigan's lead but his effort was saved by Rob Green with his rebound hitting a post and bouncing behind.

It was a huge let off for Redknapp, whose side were handed a lifeline with just under 20 minutes left.

Gary Caldwell brought down Hoilett just inside the box and Clattenburg pointed to the spot. Austin kept his cool and sent Carson the wrong way to level for Rangers and ease the nervousness around Loftus Road.

Both sides pushed for the winner, with QPR shading the chances, but the tie headed into extra time.

Rangers needed just six minutes to get themselves in front, Austin superbly diverting Bobby Zamora's ball past Carson to give them a vital lead.

Rob Kiernan's late deflected strike almost sent the tie into penalties but Rangers held on to seal their place at Wembley as their fans invaded the pitch in celebration.

QPR manager Harry Redknapp: "The suit is soaked, but it was worth it, it was a good night and you have to enjoy it. We've now got a final to look forward to.

"It will be great for the owners and fans and players and that is all the matters to me. I would love to see them back in the Premier League.

"The fans drove us on, the players drove us on and it was an excellent performance. We kept going, they competed with their lives.

"Steve McClaren is an excellent coach and Derby are a sharp, bright team.

"There is not much between us and Derby. That will be another difficult match."

Wigan boss Uwe Rosler: "We gave it all. The players squeezed every little drop they had.

"The squad of players have been tremendous. We started with players who ordinarily would not have started.

"We started well, we took a massive gamble with James McArthur but he had to go off.

"Before they scored we had some good chances and in extra time I thought we were the better side and we were unfortunate not to get to penalties."