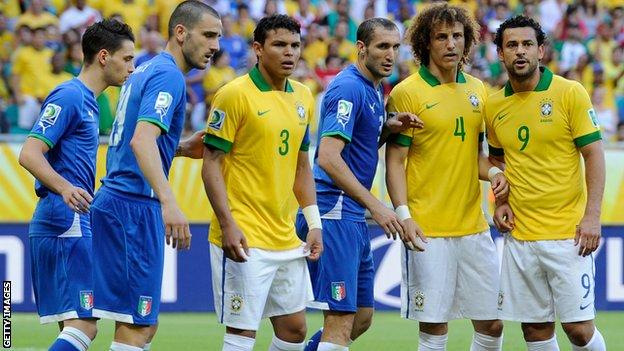 The first time I went to Brazil, 21 years ago, my little doze on the beach was interrupted by a huge roar, and I looked up to find, as far as the eye could see, people jumping up and down and cheering.

News had just come through that Ayrton Senna had won the Brazilian Grand Prix in Sao Paulo.

After Senna died, I was surprised by how the country's interest in Formula 1 fell.

"You can't really get involved in an event," wrote one prominent Rio columnist on the recent Chinese Grand Prix, "when the best-placed Brazilian is fighting for 10th place."

Last Thursday was the 20th anniversary of Senna's death. During the commemorations, 1970s racing great Emerson Fittipaldi lamented his compatriots' tendency only to follow a sport if one of their own is in contention for the title - a habit well-known to local TV executives.

"Would you accept being second?" he asks. "No one would accept this. So let's go to work thinking of finishing first.

Tennis, by no means a mass sport in Brazil, had a brief burst of popularity while Gustavo Kuerten was at his peak. In the words of Andre Rizek, presenter of a TV show on which I make regular appearances, "our national sport is not football, it is applauding winners".

It is a point of view that helps explain the importance of football in Brazil - and especially the World Cup. Every four years, the tournament holds the attention of many Brazilians who, on a daily basis, have little interest in the game.

Put simply, the World Cup is where Brazil win on the global stage. As 1970 centre forward Tostao once told me, this is when for Brazilians football turns into "something heroic. The people feel avenged. You might be the First World at other things, but we're the best at this".

This emphasis on winning might surprise those who have fallen for the standard myth - of Brazilian football as a king of Carnaval in boots, everyone more concerned with enjoying and expressing themselves than with the result. The truth could not be more different.

There is no myth in the individual skill that Brazilian football has produced, a tradition with worthy heirs in Neymar and Oscar.

It should be no surprise that Brazil produces so many fine players; South America has a rich football tradition, where the game is the only true mass sport. The population is around two hundred million - of which many have limited opportunities for social advancement through more formal means.

But in a low-scoring game such as football, flair on its own has rarely been enough. The way to get full value for that individual brilliance, and to ensure it has more space in which to operate, is to defend well. Brazil's defensive record in World Cups is, and always has been, far superior to that of Germany.

That is partly due to the fact that some of those great players the country has produced have been defenders. But it is also down to tactical organisation. Brazil were pioneers in the development of the back four, with its key concept of defensive cover.

They used it in their first World Cup win, in Sweden in 1958. With the exuberant young Pele, Garrincha working his magic on the right wing and Didi pulling the strings from central midfield, it is one of the great stereotypical 'Brazilian' sides - and they did not concede a single goal until the semi-final.

A left winger in that side and in the one which successfully defended the title four years later, Mario Zagallo was an early practitioner of the art of tucking back into midfield - hugely influential in the way that Alan Ball and Martin Peters interpreted their wide roles in England's 1966 side.

Four years later, Zagallo was Brazil's coach when they won in such style in Mexico - and he has told me that he is happy to consider that side as a forerunner of today's 4-5-1, or 4-2-3-1. "We brought our team back behind the line of the ball," he said.

And there is another aspect to Brazil's success which Zagallo also does much to illustrate. I told him that England went to Chile in 1962 without so much as a doctor, and he was so shocked he almost fell off his chair.

In 1958, Brazil had taken a full delegation of doctors, a dentist, a sports psychologist (a premature experiment, as it proved, but revealing nonetheless) and physical preparation specialists. Every care was taken in pursuit of the ultimate aim, victory.

This is the backdrop to the insistence of current coach Luiz Felipe Scolari that Brazil will win the 2014 World Cup.

"Would you accept being second?" he asks. "No one would accept this. So let's go to work thinking of finishing first." When he took charge towards the end of 2012, one of his first tasks was to draw up plans, soon circulated to the players, outlining activities all the way up to 13 July - the day of the World Cup final.

When he names his squad this Wednesday - no flim-flam with a list of 30, he will go straight to 23 players - the chosen men will be well aware that only one outcome will be considered acceptable.

Most of the star players for Brazil and Argentina are based in Europe. Is there any resentment among the home fans, or players, about locals not getting a look-in? Tony Fenlon

It certainly can be an issue - but only when results are disappointing. Then the cry goes up for more home-based talent - usually players who will be sold abroad within the next few months.

When a home-based side has been tried out in serious competition - Brazil coach Emerson Leao went with it in 2001 - it has normally fallen flat. A home-based side from Argentina these days would stand almost no chance of qualifying for the World Cup.

Uruguay will have two of the world's most in-form strikers in Brazil - Luis Suarez and Edinson Cavani - yet the rest of the team is very old. Have there been any other cases at a World Cup where a South American team have had such a mis-match of a select few players at their peak, with the rest of the team past their sell-by date? Ruairí Grego

It's not an exact comparison - not least because 'past their sell-by date' would be a bit disrespectful - but some of this applies to Brazil's 1962 side, which won the competition. It was essentially the same team that won in 1958, and almost all of them were over 30.

The youngster was striker Amarildo, in for the injured Pele. Garrincha on the wing and centre forward Vava were in their late 20s. Midfield anchorman Zito was just about to hit 30- everyone else had passed that milestone.