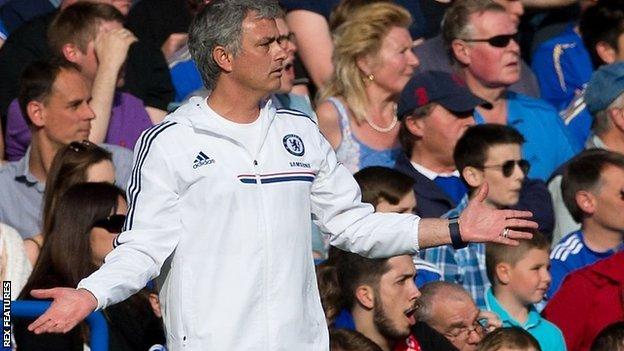 Jose Mourinho says that the addition of a "killer" striker will be the key to Chelsea beating stubborn opposition next season.

Chelsea's Premier League title hopes were all but ended by a 0-0 draw with relegation-threatened Norwich.

"We don't have the kind of striker able to, in a short space, to make an action, to score a goal, to open the gate," Mourinho said.

"Against teams that are more defensive, more aggressive, more worried about trying to keep a clean sheet than really to play, we keep saying the same.

"In these kind of matches, you just need to open the gate. When you open the gate, the gate is open and you win much more. We weren't able to do that.

"We have to try to win as a team, to improve as a team, but also add the attacking player with that killer instinct and the number of goals that push teams to different levels.

"It's something our club is going to try to do, respecting obviously that we have good strikers."

Meanwhile, there are doubts over the futures of captain John Terry, England left-back Ashley Cole and record goalscorer Frank Lampard.

All are out of contract this summer and their positions have not been clarified ahead of the final match of the campaign, away to relegated Cardiff City on Sunday.