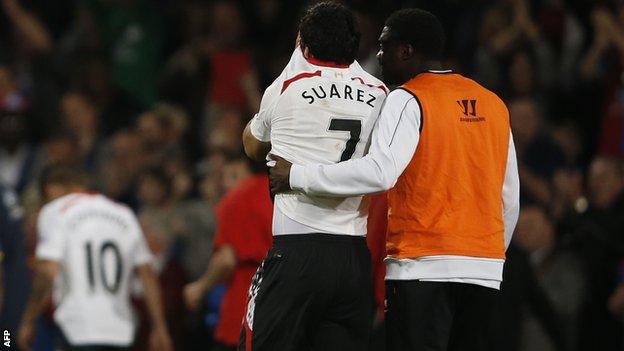 A tearful Luis Suarez was led away from the scene of the accident with his face hidden inside his white Liverpool shirt, first by captain Steven Gerrard waving away an intrusive television camera, then by unused substitute Kolo Toure.

Gerrard had been on his haunches, as had several of Liverpool's players, while others sat in utter misery on the Selhurst Park turf before manager Brendan Rodgers emerged into the media suite and spoke of his squad being "devastated".

Never has going top of the Premier League with one game to play been greeted by such an outpouring of grief, despair and disappointment - but this was a thunderous night in south London that turned all logic on its head.

This time the Premier League table did lie, for now at least. Liverpool were top by one point from Manchester City, but the overwhelming belief coming out of their camp was that this was the night their flamboyant attempt to win their first crown in 24 years went west. The body language spoke word-perfect desolation.

With 11 minutes left on the clock, Liverpool deservedly led 3-0 against a timid Crystal Palace, who had little other than professional pride to play for with survival secured.

Three goals ahead, looking at a three-point lead at the top of the table while cutting nicely into Manchester City's superior goal difference with obvious power to add.

What could possibly go wrong? Answer - pretty much everything.

In those 11 minutes Liverpool went from calm control to blind panic. Damien Delaney's deflected shot rattled a few nerves before they simply crumbled in the most alarming fashion, allowing substitute Dwight Gayle to score the two goals that gave Palace a point and City an almighty shove towards the title.

Liverpool have been on the right end of coming back from 3-0 down, as the world knows well. This was the painful reverse in a game that was swiftly christened "Crystanbul."

Liverpool's superb progress under Rodgers this season has long been accompanied by the suspicion that the beauty of their attacking play was disguising a defence that could crack under pressure. The point was proved painfully, spectacularly, at Selhurst Park.

Take a look at the 6-3 win at Cardiff City, the 4-3 win at home to Swansea City, the 5-3 win at Stoke City. The signs were there that one day Liverpool's brilliant attacking play would not bail out a fragile defence. This was that day.

Many factors were at work as the sub-plots of the title race unfold. As Liverpool surged into that three-goal lead just after half-time, there was the sense on and off the pitch that they had been presented with a golden opportunity to make up significant goal difference ground on City.

All Dwight on the night

Dwight Gayle has scored five goals in the Premier League this season - three of them against Liverpool.

As the Liverpool fans chanted "attack, attack, attack", their players got carried away. Once Delaney made it 3-1 it was time to go into lockdown, take the three points and exert the pressure on title-rivals Manchester City when they play Aston Villa on Wednesday.

Instead, Liverpool were strung out all over Selhurst Park. The weaknesses in defence were ruthlessly exposed by the pace and energy of a Palace side revitalised under manager Tony Pulis.

Rodgers spoke of "game management" and there was the sound of a nail being hit firmly on the head. Liverpool simply could not switch from a team chasing goals at 3-0 to a team needing to close the back door at 3-1. This Liverpool team does not appear to have a reverse gear.

No-one was taking control in Liverpool's defence. It was coming apart at the seams after 79 minutes of domination and Palace, roared on by an atmosphere as intoxicating as any in the Premier League, seized their chance.

Rodgers also emphasised the need to think clearly under pressure. This was conspicuous by its absence in a crazy concluding phase that included chances for both sides even after Gayle made it 3-3.

Liverpool have scored 99 Premier League goals and conceded 49. While one part of that equation is that of a title-winning team, the other is clearly not. If City do win the title then it does not take a coach of Rodgers's undoubted acumen to spot where Liverpool's fault line lies. Teams defending as badly as Liverpool rarely end up as champions.

For all the talk of Southampton's Adam Lallana, who would undoubtedly be a fine addition to Liverpool's attacking riches, it is in defence where the real work needs to be done.

Rodgers effectively conceded the title to City after the game - but surely this is more a psychological ploy that a serious acceptance that Liverpool's chance has gone?

Monday's game told us many things and one of them is that this Premier League season is as unpredictable as it has ever been. Would it be such a shock if City slipped against Villa or West Ham United given recent results around the top and bottom of the table?

Liverpool will hope this is the case and they can still end the season in glory against Newcastle United at Anfield on Sunday.

One look at the heartbroken figure of Suarez and his Liverpool team-mates scattered around Selhurst Park at the final whistle said otherwise.

It is a sign of Liverpool's wonderful development under Rodgers that they should feel such disappointment at the prospect of losing the title on the season's final day - but there was little consolation around Selhurst Park on Monday.