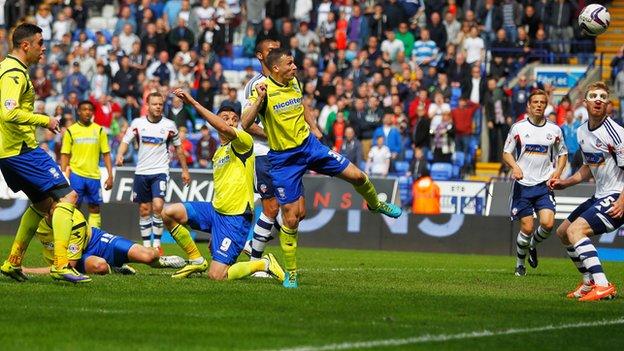 Birmingham City full-back Paul Caddis, who kept the club in the Championship, says he has to keep watching the video footage of their great escape at Bolton - to remind himself how it happened.

"I've watched the footage of it all over and over again," Caddis said.

"I remember going up at the far post, but I don't remember much after that."

In his first full season on loan with Blues, former Swindon Town captain Caddis failed to find the net.

But, after completing his move from the County Ground on deadline day in August, Caddis, who suffered a major fall-out at Swindon under Paolo di Canio, has proved one of Birmingham boss Lee Clark's most dependable players.

So much so, the 25-year-old Scotsman was handed the responsibility of being Blues' penalty taker.

After scoring three of his four previous goals this season from the spot, Caddis, the only player for whom Clark has paid a transfer fee in his two seasons in charge, was already well used to the sensation of hitting the back of the net.

But nothing prepared him for the events of Saturday afternoon at the Reebok Stadium.

As his header looped in, pandemonium erupted, triggering boss Clark to show his emotions with a gallop down the touchline towards the away fans.

Thanks to Caddis's goal and Doncaster's defeat at Leicester, Blues' place in the Championship was saved, leaving the defender almost lost for words.

"I thought at the time that Nikola Zigic's header had crossed the line, then one of the Bolton defenders coming towards me trips over the keeper.

"Then I can remember going up for the header, but that's all I could remember until I watched the video.

"It's certainly one the manager won't forget and each and every fan too.

"We were 15 minutes away from being relegated, going from one of the lowest feelings to one of the highest - a real emotional roller coaster.

"But, when we were 2-0 down, the first thing we heard was our fans singing and that gave us the lift. After we got the first one, the belief right through the team was incredible."