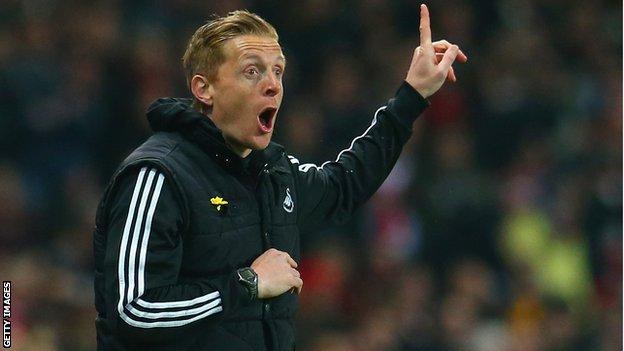 Garry Monk will need the help of an experienced assistant if he is to be given the Swansea City job full-time, says ex-Wales defender Jason Perry.

Monk will meet Swansea chairman Huw Jenkins this week to finalise terms on a deal expected to see him appointed as permanent manager.

Monk deserves the chance to become Swansea City manager on a permanent basis but would benefit from have another assistant alongside Alan Curtis, said Perry.

"He's learning his trade. He doesn't want to find out his mistakes by winning or losing games," Perry added.

"Somebody that's young, dynamic, similar to himself with bright ideas and plays the same way as they demand at Swansea City.

"Maybe someone like Eddie Newton. A number two to go with Alan Curtis, who has done a fabulous job, and keep the staff.

"Get somebody in there that's been there [at that level]."

While Perry says Monk needs help, he does not believe a director of football role is necessary at the Liberty Stadium with Jenkins such a crucial figure.

"Some people have said a director of football. I don't think they need that because I think Huw Jenkins is very good at what he does.

Monk took over under the title of head coach from Laudrup, guiding the club to Premier League safety with two games to spare.

Club bosses hope to confirm the appointment before Sunday's final game of the season at Sunderland.

Since taking over Monk has seen his side win four, draw three and lose six of their Premier League games.

Swansea secured a place in the Premier League next season when they beat Aston Villa 4-1 on 24 April.

He made 260 appearances for the club, scoring seven goals.