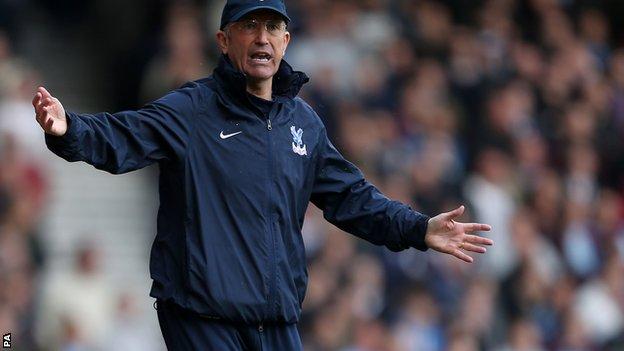 Manager Tony Pulis says he will discuss his long-term plans for Crystal Palace with chairman Steve Parish this week.

Palace were in the Premier League's relegation zone when Pulis replaced Ian Holloway in November, but the Welshman has guided the Eagles into 11th place.

Speaking after the 3-3 draw with Liverpool on Monday, he said: "Steve and I will sit down and talk.

"This is a smashing club with fantastic support and potential, but it's a way behind what it should be."

Pulis, who has two years remaining on his contract, recently told the BBC the club "needs an upgrade everywhere".

And having steered the club to Premier League safety, Pulis now wants to discuss how improvements can be made.

The 56-year-old said: "It was the same situation when I was at Stoke.

"I had a magnificent chairman in Peter Coates, who backed me and allowed me to build a club over seven or eight years, and that's what you want.

Palace scored three times in the final 11 minutes against Liverpool to come from 3-0 down and snatch a point at Selhurst Park.

Goals from Damien Delaney and a double from substitute Dwight Gayle dealt a severe blow to the visitors' title hopes.