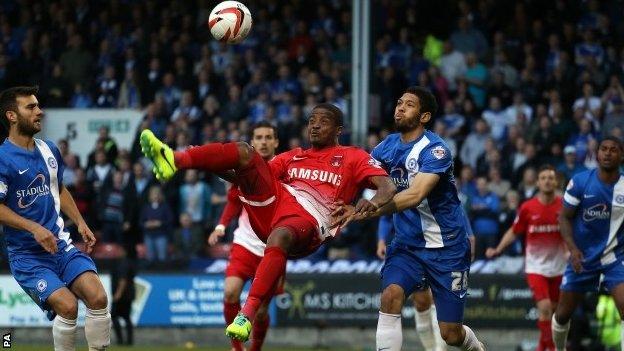 Leyton Orient are through to the League One play-off final after a narrow 2-1 victory over Peterborough.

Dean Cox gave Orient the lead on the hour mark and Chris Dagnall seemed to have secured the win, collecting Shaun Batt's pull-back and stabbing home.

But the O's held on to progress 3-2 on aggregate and earn a final place against either Preston or Rotherham at Wembley on 25 May.

Victory in that game would earn Russell Slade's side a place in the second tier for the first time since 1981-82.

Peterborough, though, are condemned to a second season in League One after their relegation from the Championship last term.

Darren Ferguson's side controlled the midfield early on but were unable to create any clear-cut chances. Their best first-half moment came when Britt Assombalonga collected a flick from Nicky Ajose and sent an angled shot over the bar.

Orient finished the half stronger, with Lloyd James's long-range shot forcing Robert Olejnik to palm the ball behind. The Peterborough goalkeeper then dropped a cross but Orient striker David Mooney could only drag his shot across goal.

The visitors started the second period on the front foot and Ajose released Danny Swanson with a clever through ball. However, the midfielder wasted the opening, snatching at his shot and screwing it wide with Assombalonga lurking in the middle.

Posh right-back Mark Little then grazed the outside of a post with a low cross-cum-shot.

Orient then took the lead after being awarded a free-kick on the edge of the box when Nathaniel Knight-Percival hauled down Kevin Lisbie.

Dean Cox's effort was blocked but the winger collected the rebound and volleyed into the bottom left-hand corner for his 16th goal of the season.

Substitute Shaun Batt then had a glorious chance to extend the lead but, after being found by Mooney, sent his shot straight at Olejnik.

Peterborough piled forward in search of an equaliser but showed little cutting edge and, with two minutes remaining, Orient broke away to double their lead.

Batt was released down the right and found fellow substitute Dagnall with his cut-back. The forward had time to control the ball and enough composure to guide a finish into the net to make it 2-0.

The goal sparked jubilant scenes at the Matchroom Stadium but stoppage time proved tense for supporters of the east London side as Peterborough pulled a goal back through Washington.

Even Olejnik came forward for a couple of late set-pieces but the visitors, who had won promotion in their previous three play-off campaigns, were unable to trouble Orient keeper Jamie Jones.

The final whistle sparked a pitch invasion and Orient will find out their Wembley opponents on Thursday, when Preston face Rotherham.