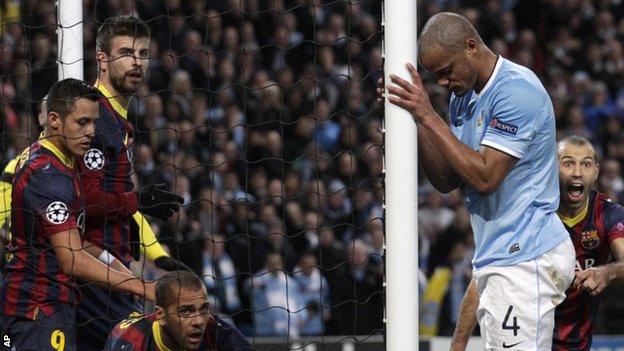 Manchester City and Paris St-Germain are facing fines in the region of £50m, restrictions on their Champions League squad size and a wage limit for failing Uefa financial fair play rules.

BBC Sport has learned the two - among nine clubs under examination by Uefa for failing the governing body's "break even" test - face similar penalties.

It is believed a Champions League squad reduction could see the clubs restricted to using anywhere between 18 and 21 players in Uefa's premier competition. A normal squad size is 25.

Under this monitoring period, total losses of €45m (£37m) are permitted as long as clubs have owners who can cover such amounts.

A wage cap could also be introduced on the errant clubs to ensure there is no rise on this season's squad wage bill for the Champions League.

Negotiations between PSG and the investigatory panel of Uefa's Club Financial Control Board (CFCB) are thought to be nearing a conclusion with the French club prepared to accept a 21-player cap on the size of their Champions League squad for next season.

That measure will be combined with a limit on the overall wage bill for their Champions League squad, meaning PSG cannot exceed the amount they spent on salaries this season.

It is believed the club will also have part of their Champions League payments and prize money withheld by Uefa for the next three seasons, equating to £16.5m per season.

It is thought clubs have until Friday to agree a "settlement" with Uefa.

Failure to agree a deal would see a club referred to an adjudicatory panel in June where a non-negotiable penalty would be applied.

At that stage clubs could then seek a final appeal at the Court of Arbitration for Sport in Switzerland.

City manager Manuel Pellegrini sidestepped the sanctions issue at a news conference on Tuesday. He said: "When it is official news of Uefa we can analyse what happens with the team. In this moment we don't know what happens."

Under Uefa's FFP rules, clubs can lose no more than £37m over the previous two seasons.

Arsenal and Manchester United were in the black for the last two seasons, so they have nothing to fear from Uefa's financial fair play scheme.

Chelsea made a £49.4m loss last year but registered a £1.4m profit in 2012 so will comply with the new regulations.

Liverpool, who have lost £90m over the last two years but have not played in Europe this season, will not have to pass the FFP rules until next autumn.

Uefa introduced FFP because it fears many clubs are risking their futures by spending beyond their means, while Uefa president Michel Platini also believes the big spending of some clubs is ruining the game.

PSG's failure to adhere to FFP is understood to stem from the club's controversial contract with the Qatar Tourism Authority.

The contract is said to have been ruled as valid by Uefa but the overall value of the deal - worth up to £165m per year - has been deemed excessive.

PSG are also understood to have argued with Uefa that French income tax levels in France made complying with FFP that much tougher.

Sources close to the club say that, over a three-year period, they will pay £163.9m more in wages than an equivalent club based in Germany because of taxation.

Uefa ultimately rejected the club's argument that they have to pay higher gross salaries to attract and keep their star players.