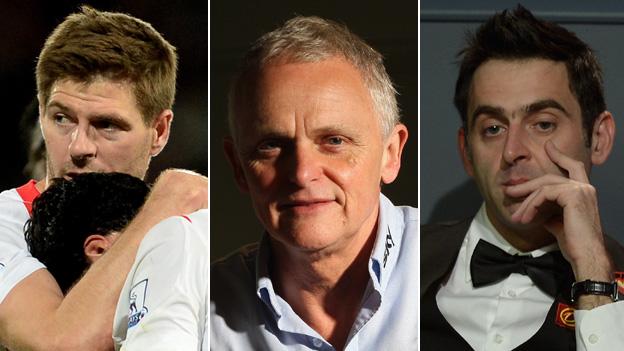 Monday proved a dark day for Liverpool and Ronnie O'Sullivan but spare a thought for the psychiatrist working with both of them - Dr Steve Peters.

Within the space of 23 minutes his star pupils both relinquished leads to suffer crushing disappointment, and in the process perhaps some of the shine appeared to come off Peters' accomplishments across British sport in recent years.

For Peters, who helped Team GB's cycling team at London 2012 and who will work with the England football squad at the World Cup this summer, it was a sign that even his powers have their limits.

Tellingly though, O'Sullivan - who had Peters in his dressing room throughout the final at the Crucible - spoke far more positively after his defeat, while Liverpool emotions were summed up as striker Luis Suarez left the Selhurst Park pitch in tears.

Asked the next morning about the Liverpool result, Peters sounds rueful when he says "no comment". He does not want to be drawn on Liverpool's performance with the title still technically in the balance.

But he remains philosophical after his subjects suffered their setbacks and he admits he will reflect on what he can do better following O'Sullivan's loss.

"I always have to look at what I'm doing because that is my job, to make sure I am getting it right," Peters tells BBC Sport.

"You get feedback from the athlete themselves and then I reflect on what we could have done differently and whether we have we done enough of the right things.

"The difficulty in sport is that it is always a throw of the dice. Sometimes you put a lot of work in, everything is in place, and they don't win. Other times, you think 'wow, I'm not sure we have got this quite right' and then they go and win and you are given false accolades where you think you don't deserve any.

"At the end of the day, it's up to Ronnie to tell me how well he feels it's gone because only he knows if it's worked or not."

Despite O'Sullivan missing a crucial pink with the match tied at 11 frames-all, it looked as though Liverpool could have used Peters' expertise more than the 38-year-old. It was a suggestion made by the five-time world champion earlier in the tournament.

If Liverpool can have Steve there for four or five years, then they'll win the Premier League

O'Sullivan said that he felt able to cope without the psychiatrist he has worked with for three years, mindful of Liverpool's title pursuit. But after flirting with defeat against Joe Perry in the second round, he admitted that advice was a mistake. "Steve is going to be around a bit more now," O'Sullivan said.

Monday's defeat for O'Sullivan might have been easier to swallow because he has won the past two world titles, while Liverpool were looking to end a top-flight title drought going back to 1990.

But Peters says most of the work he does is away from the sporting arena, so it appears that his influence over Liverpool on the night would have been limited anyway.

"All you can ever do from my perspective with mental skills is try to tilt the probability that people will do better by not sabotaging events with their emotions or thinking or actions," he says.

"But once you have stabilised that, it is up to them to deliver the performance.

"I don't usually say anything that we haven't planned before. The way I work is that we have a mental strategy put in place and, with Ronnie, a skill base which we have worked on for the last three years, so there are no last-minute top-ups or wild encouragement.

"That's not the way I operate."

For a man who will work with England boss Roy Hodgson in Brazil this summer, you get the impression he will not be affected by the fluctuating emotions as the nation gets behind its team.

And once the dust has settled on Liverpool's Crystal Palace disappointment, perhaps they can conclude that even if they don't win their first top-flight title for 24 years, they have had a successful season.

Peters says: "I am trying to get everyone to reach their potential. When you have had big success like at British Cycling, people are bound to be interested and say this is amazing stuff and so on.

"Maybe if they picked out five or six athletes I've worked with who reached their potential and didn't actually medal but felt they could not have done any better, people might see it as failure.

"But as long as people have reached the optimum of what they can do, then we live with the outcome because that's sport and it is a bit unpredictable."

On reflection, it should be a season to be proud of for Liverpool. A Champions League spot was the target and the club have ended up being title challengers.

Peters will not be the only one to ensure that lessons are learned for next season.