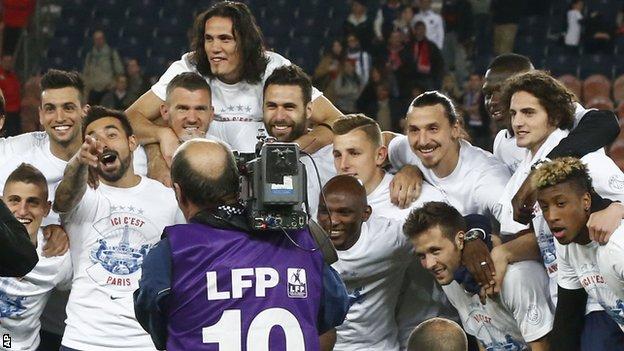 Paris St-Germain celebrated retaining the French title but saw their party dampened as Rennes inflicted a first home Ligue 1 loss of the season.

Laurent Blanc's team were crowned champions shortly before kick-off after second-placed Monaco were held to a 1-1 draw by Guingamp.

Monaco's draw left PSG with an unassailable seven-point lead ahead of the final two rounds of matches.

PSG are the first team to retain the French title since Lyon in 2007-08.

Goals from Foued Kadir and Paul-Georges Ntep gave the visitors a 2-1 lead before the half-hour mark.

Even the return of Sweden striker Zlatan Ibrahimovic, who scored 40 goals in 44 games before injuring his thigh against Chelsea in April, could not inspire a fightback at the Parc des Princes.

Nevertheless, the Parisian club's players and staff were given a rapturous reception as they performed a lap of honour after the full-time whistle.