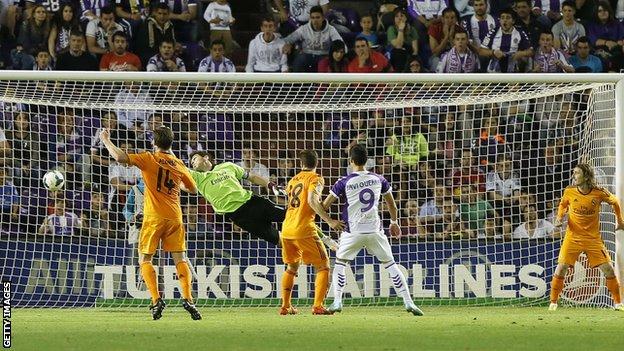 Real Madrid's treble ambitions appear to be over as a late equaliser for struggling Real Valladolid dented their hopes of winning the Spanish title.

Defender Sergio Ramos put Madrid ahead with a powerful 25-yard free-kick into the roof of the home net.

But without injured duo Gareth Bale and Cristiano Ronaldo, who was substituted after nine minutes, the visitors lacked genuine attacking threat.

Atletico Madrid win the title if:

They win their final two matches against Malaga (H) and Barcelona (A).

Barca lose at Elche and they beat Malaga.

Barcelona win the title if:

* If teams finish level on points the title will be decided on their head-to-head record. That will be not be determined until after their final-day meeting at the Nou Camp

Real Madrid out of the title if:

And they were punished when substitute Humberto Osorio headed a late leveller.

And the destination of the title appears to be going down to a tantalising final-day clash between second-placed Barcelona and Atletico at the former's Nou Camp stadium on 18 May.

Atletico, who are targeting their first La Liga since 1996, are three points ahead of defending champions Barca.

The Catalan club could pip Atletico on their head-to-head record, which is used to separate Spanish top-flight sides if they finish level on points, if they beat Diego Simeone's men.

Barca boss Gerardo Martino thought his side's ambitions were over following Saturday's 2-2 draw against Getafe, only to see them revived by a stuttering Real side, who also failed to beat Valencia on Sunday.

After seeing Portugal superstar Ronaldo trudge off with an early injury, Madrid struggled to penetrate the Valladolid defence without the pacy attacking threat of the Ballon d'Or winner and Bale, who Ancelotti said was absent with an unspecified "knock".

Without the pair, Ramos stepped up to score his fifth goal in 10 days with a perfectly-executed free-kick on his 400th appearance for Madrid and just days after the birth of his first child.

Real continued to control possession after the break, but rather than going for the killer second, they seemed content to maintain their slender advantage.

But that only served to give confidence to Valladolid, who seemingly extinguished Real's title ambitions when Colombian forward Osorio powerfully nodded Alvario Rubio's right-wing corner past the recalled Iker Casillas, who had no chance of saving it.

"We had the game controlled. We didn't have the mental energy to finish these games. There were mistakes in these last two games.

"It's going to be very difficult to win the title."

"It is practically gone now but while there is a mathematical chance then Madrid are obliged to keep going. It has been a long season and it takes its toll on the body."