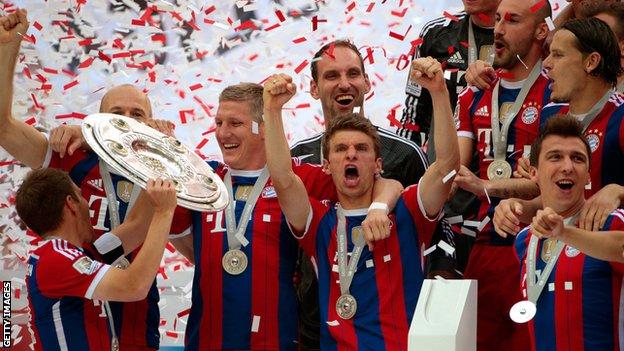 Champions Bayern Munich crowned an impressive Bundesliga campaign with a last-day victory over Stuttgart to finish 19 points clear at the top.

Claudio Pizarro scored two minutes into injury time as Pep Guardiola's side finished the league season on a high.

Bayern, who finished with four straight wins, clinched the title in March with a record seven games to spare.

They will secure a domestic double if they beat Borussia Dortmund in the German cup final in Berlin on 17 May.

Although Bayern won the league several weeks ago, the final whistle against Stuttgart sparked a wave of celebrations on and off the pitch at the Allianz Arena.

Guardiola, who has also won the Uefa Super Cup and Fifa Club World Cup in his first season in charge, was drenched in beer by his players.

The Spaniard celebrated with daughters Maria and Valentina after the match, while his players paraded the Bundesliga shield for the 24th time.

They won 29 of their 34 league games - including a 7-0 victory over Werder Bremen and a 6-1 triumph against Wolfsburg - and scored 94 goals.

Guardiola's only disappointment in an impressive season was the Champions League semi-final defeat by Real Madrid.

As they prepare for next season, Bayern have already signed Borussia Dortmund striker Robert Lewandowski, who ended the season with 20 league goals.

The 25-year-old Poland international has agreed terms on a five-year deal and will arrive at Bayern on a free transfer when his Dortmund contract expires next month.