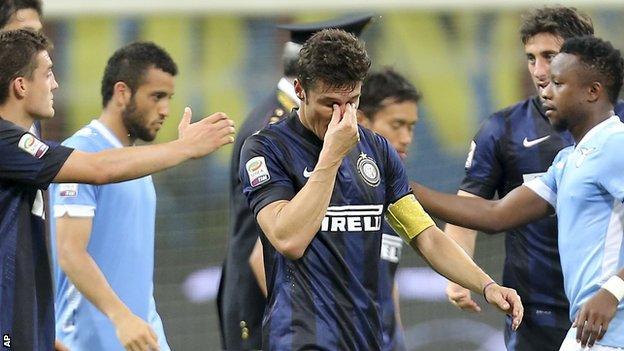 Giuseppe Biava put the visitors ahead, but a Rodrigo Palacio double and Mauro Icardi's goal put Inter in control.

Substitute Zanetti came on to a huge roar in the 55th minute, before Brazil midfielder Hernanes added a fourth.

Club career: After spells in his homeland with Talleres and Banfield, has spent a record-breaking 19 years with Inter Milan

Zanetti, Inter's record appearance holder with 863, will retire from playing at the end of the season.

The 40-year-old, who joined Inter in 1995 from Banfield in his native Argentina, had the words 'Zanetti 4 ever' on the back of his shirt.

In added time an Inter supporter ran on the pitch and had to be escorted away by Zanetti, who spoke to the fan and was given a standing ovation by the whole ground as he did so.

The five-time Serie A champion and 2010 Champions League winner is to become the club's sporting director.

Fans waved 'El Capitano' scarves throughout the win, which saw Inter move one point behind fourth-placed Fiorentina in Serie A with one game to go.

However, Fiorentina will move back four points clear of Inter if they win at bottom club Livorno on Sunday.