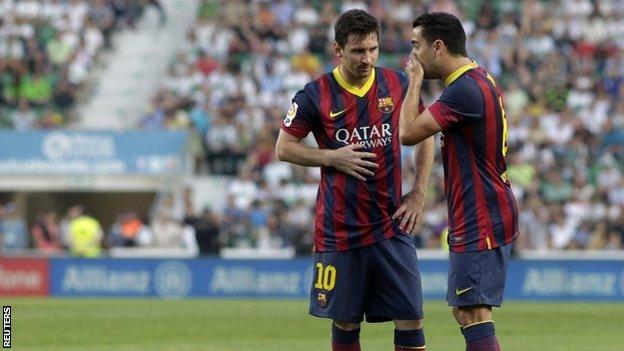 Barcelona set up a final-day La Liga title showdown with Atletico Madrid next Saturday after drawing with Elche.

It keeps Barca three points behind Atletico going into that game at the Nou Camp, where victory would see Barca win the title on head-to-head record.

However, a Barca win over Elche would not have changed anything in terms of what was needed on the final day.

The visitors had the best chances with Andres Iniesta hitting a fantastic volley which was saved by Manu.

Alexis Sanchez, Pedro and Lionel Messi all had opportunities before Adriano curled just wide late on for Barcelona.

Elche, whose point has secured their safety from relegation, failed to test Barcelona keeper Jose Manuel Pinto in the 90 minutes.

Had Atletico beaten Malaga in their match which was being played at the same time, Diego Simeone's team would have won the title. However, that match finished 1-1.

Last weekend, Barca's title hopes looked over after drawing 2-2 with Getafe to leave them three points off Atletico, with the club rumoured to be in talks with Luis Enrique about replacing head coach Gerardo Martino.

However a lot can change in eight days and they are now favourites to win the league in Martino's first season in charge.

Barca and Atletico drew 0-0 in their previous league meeting in January.