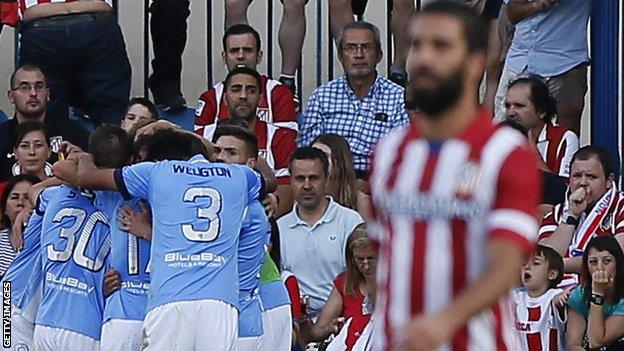 Atletico Madrid's 18-year wait for the La Liga title will go to the final weekend of the season after Diego Simeone's leaders were held by Malaga.

Atletico, who would have won the title with a win, were made to pay for a host of missed chances when Samu bundled Malaga ahead against the run of play.

Toby Alderweireld rescued the hosts with a header before Malaga's Marcos Angeleri was sent off.

Atletico will seal the league if they avoid defeat at Barcelona on Saturday.

A victory for the Catalans in that game will see them retain their title by virtue of their head-to-head record against the Madrid side.

With Barcelona drawing at Elche, Atletico would have been crowned champions of Spain for a 10th time had they beaten Malaga.

But, after a game of wasted chances and missed opportunities, an intriguing and thrilling title race will now be decided at the Nou Camp on the final day of the season.

Atletico head for second-placed Barca, who they eliminated from the Champions League last month, with a three-point cushion.

Yet Simeone knows his side passed up a great opportunity to wrap up the league with one game to spare.

David Villa hit the woodwork in the 15th minute when he should have scored after a clever flick by Raul Garcia.

Midfielder Koke stabbed another chance wide before an unmarked Garcia headed wide from inside the six-yard area.

Atletico were made to pay for those wasted opportunities as Samu netted against the run of play after lobbing Atletico's on-loan Chelsea keeper Thibaut Courtois in the 65th minute.

Malaga defender Angeleri, who had earlier been booked, was sent off two minutes from the end of normal time following a second yellow card as the hosts piled forward in search of a winner.

Substitute Adrian Lopez thought he had won Atletico the title with a curling shot in stoppage time.

But, in keeping with this absorbing title race, his goal-bound effort was dramatically tipped over by Willy Caballero, the Malaga keeper's save ensuring the identity of the 2013-14 champions of Spain will not be known until the last day.