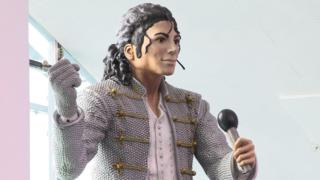 Fulham's Michael Jackson statue, which previously stood outside their Craven Cottage ground, is given a new home at the National Football Museum in Manchester.

The artwork was installed in 2011 by the Premier League club's former owner, Mohamed Al Fayed - a friend of the late pop star - but removed by his successor Shahid Khan two years later.

Al Fayed says he advised Khan against the statue's removal and that Fulham may not have been relegated this season had they kept it at the club.