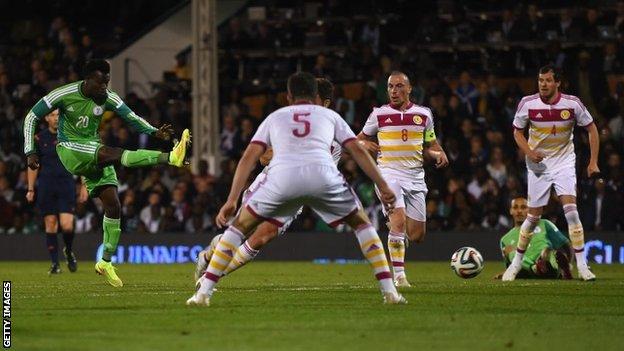 Nosa Igiebor is one of the seven players to be dropped from Nigeria's final 23-man squad for the World Cup.

The Real Betis midfielder and Parma's Joel Obi, who both faced Scotland in last week's 2-2 draw, have been plagued by injury this season.

Bastia's Sunday Mba is also dropped from the provisional 30-man squad, despite scoring the winner in last year's Africa Cup of Nations final.

Otherwise coach Stephen Keshi has opted for a tried and trusted line-up.

Experienced trio Joseph Yobo, Vincent Enyeama and Austin Ejide will be making a third appearance at the World Cup.

The other players to miss out are goalkeeper Daniel Akpeyi, midfielders Ejike Uzoenyi and Nnamdi Oduamadi.

The three-time African champions will play Greece in Philadelphia on 3 June then face USA in Jacksonville, Florida on 7 June, before they fly out to Sao Paulo.

Nigeria will face Argentina, Iran and Bosnia in Group F of this summer's tournament in Brazil.