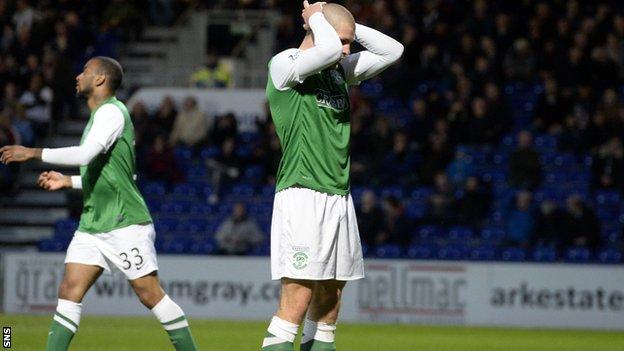 Hibernian manager Terry Butcher insists he is looking forward to the last-day showdown with Kilmarnock as his side look to avoid the relegation play-off.

The Easter Road men lost 1-0 at Ross County on Tuesday, with Richard Brittain hitting the winner from the spot, and remain in danger of finishing 11th in the Premiership.

"Everything we do from now is going to be positive. there's no negativity within the side or club," said Butcher.

With Partick Thistle visiting Hearts and Kilmarnock entertaining St Mirren on Wednesday night, ninth-placed Hibs could be in the play-off position by the time they take on Killie.

But Butcher remains confident his side will not be involved in the two-legged end-of-season tie against one of the top sides in the Championship.

"We have to [pick ourselves up] and we will. I'm still very, very optimistic we will be fine," the Hibs manager told BBC Radio Scotland.

We didn't deserve to lose the game, that's for sure, there's nothing between the sides

"We know we have to win the game, and we will go all out and do what we possibly can to make sure we get the three points.

"I'm looking forward to it and thinking about the side, and what we will do."

A dreadful run of form has dragged Hibs into the play-off picture in recent months, but Butcher believes the fans will back his side at Easter Road on Saturday.

"The fans will get behind the team, there's no doubt about that," the Hibs boss told BBC Radio Scotland.

"They've done it before and I'm sure they'll do the same now.

"They know what's at stake and they'll want to get behind the boys."

County secured their Premiership safety with the win, but Butcher believes his team should have left Dingwall with something.

"We were unlucky, we had good opportunities. We didn't deserve to lose the game, that's for sure, there's nothing between the sides," he added.

"It has been the final third [that cost us] but it's been like that all season. We are not a prolific goalscoring side and if any opportunities come our way we've got to take them, but the encouraging thing is we made opportunities and kept going.

"It's hard to take because we put a lot of effort into the match. We don't do things the easy way and Saturday is certainly a big game for us."