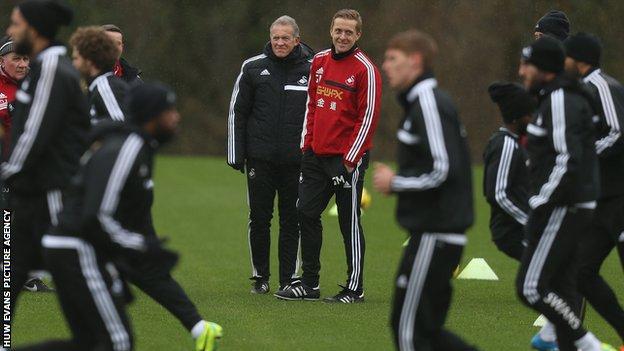 The 35-year-old, who replaced Michael Laudrup in February, has steered Swansea to Premier League safety.

Monk will meet chairman Huw Jenkins this week to finalise terms on a deal expected to see him stay in charge.

"It's probably one of the worst kept secrets," former Wales striker Curtis said.

"I think it's been discussed but it just needs to actually come out in the open.

"We just need final closure on it really and we can move on and start preparing for next year.

"Once we get the clarity of Garry being confirmed then we can start making decisions."

Curtis has been assisting Monk after he replaced the sacked Laudrup "for the foreseeable future" in February.

Monk guided the club to Premier League safety with two games to spare and the club hope to confirm the appointment before Sunday's final game of the season at Sunderland.

Since taking over Monk has seen his side win four, draw three and lose six of their Premier League games.

Swansea secured a place in the Premier League for next season when they beat Aston Villa 4-1 on 24 April.

He has made 260 appearances for the club, scoring seven goals.