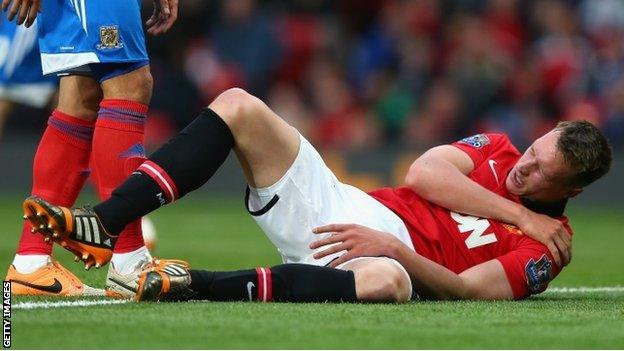 Manchester United's Phil Jones was taken to hospital for an X-ray on the shoulder injury the England defender suffered in the 3-1 win over Hull City.

The 22-year-old was hurt in a mid-air collision with Maynor Figueroa.

The news will concern England manager Roy Hodgson less than a week before he names his squad for the World Cup.

"He knew straightaway he had done something," said United interim manager Ryan Giggs. "Usually when something like that happens it is not great."

Jones has been capped nine times by his country and was expected to make Roy Hodgson's 23-man squad.

"Hopefully he will be OK but it is too near [to the incident] to say," Giggs added following the victory over the Tigers at Old Trafford which saw 18-year-old striker James Wilson score twice on debut and Robin van Persie add a late third.

If Jones was to miss the World Cup, he would join Andros Townsend and Theo Walcott on the sidelines while Tottenham defender Kyle Walker is doubtful with a pelvic injury which has sidelined him for the last two months.