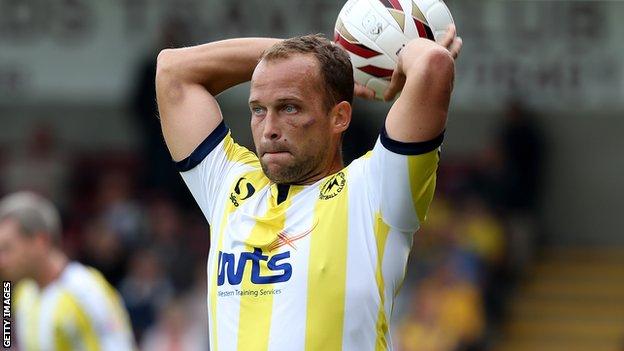 "I leave with no regrets, having had a great seven years," said Nicholson, who helped Torquay to promotion from the Conference Premier in 2009.

Nicholson was a first-team regular for much of his Torquay career and was in 2012 under Martin Ling as the Gulls reached the League Two play-off semi-finals.

"Kev's a friend and he's been a magnificent servant to the club.

"What we're trying to do at Torquay now is provide a platform for younger players and essentially clear the wage bill a little bit, Kev comes into the category of that."

A board meeting on Wednesday evening will decide the budget that Hargreaves has to spend, meaning the club are not in a position to put firm offers to their out-of-contract players yet.

After Ling's departure, Nicholson's chances were more limited during Alan Knill's spell as manager and he was

He initially got back into the team under new boss Hargreaves, but he did not play again after the 1-0 loss at Southend on 29 March as Bournemouth loanee Baily Cargill cemented his place in the side.

"I knew the writing was on the wall most of the season," said the former England C international.

"Myself and Alan Knill didn't really get along and Greavsy's come in and wanted to go a different way and I have no problem with that.

"The fact is we've lost way too many games this year and no-one's safe, he needs to rebuild and he needs the funds to do it, so I totally understand that I'm not going to be here next year."

Defender Nicholson, who has played more than 500 games in the Football League and Conference, believes he still has a lot to give to the game.

"I leave knowing I have a few years left to play and hoping that someone gives me the chance to prove that Greavsy should have kept me.

"I've never been more hungry to carry on playing and have success. I hope that this time next year that Torquay have got themselves back in the league, but will be looking at me and saying 'I wish we would have kept him'.

"I'd like to think that I've done enough over the year to impress a League Two or Conference manager who wants some experience at left-back who's going to put some crosses in, take some set-pieces and hopefully get them promoted."