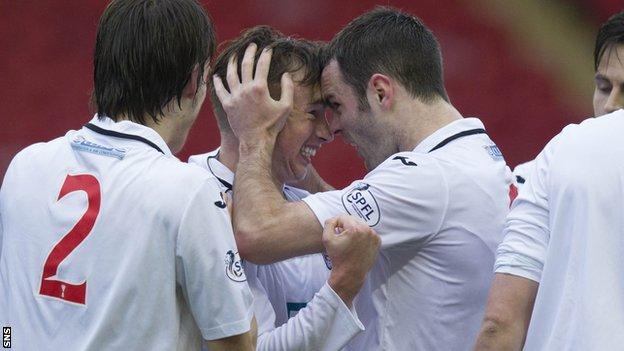 Scott Ferguson gave Clyde a narrow advantage over League One side East Fife going after the first leg of their play-off semi-final.

John Sweeney had already hit the post for the home side before Ferguson took advantage of a defensive lapse to tap in seven minutes before the break.

East Fife improved after the break and goalkeeper Jamie Barclay produced a good save to deny Marc McKenzie.

Steven Campbell and Stephen Hughes also shot off target for the Fifers.

However, the visitors' best chance came in the final seconds, when Craig Johnstone's shot from inside the area was palmed away by Barclay.

Clyde held on and Gary Naysmith's visitors, who narrowly avoided outright relegation after Arbroath lost on Saturday, must now end a run of six games without a victory if they are to reach the final and avoid the drop.

The Bully Wee had dropped to fourth in League Two after their defeat by Stirling Albion but have now won three of their last four outings.

Manager Jim Duffy had bemoaned the loss of several first-choice players through injury for the first leg.

He urged his his depleted side to keep themselves in the tie against the team from the league above and they did just that as they head to Methil on Saturday.