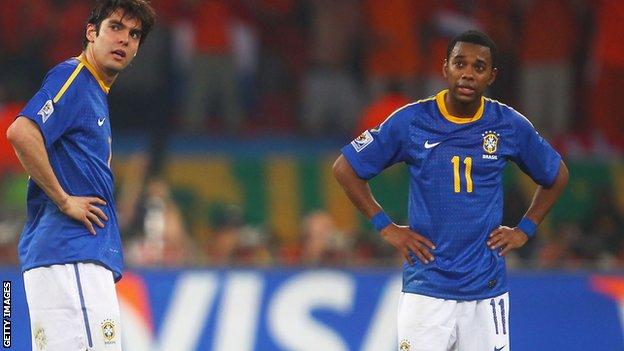 AC Milan duo Kaka and Robinho were among the big names to miss out on Brazil's World Cup squad on Wednesday.

Midfielder Kaka, 32, had been hopeful of playing in his fourth World Cup.

Chelsea's Brazilian quartet of defender David Luiz and midfielders Oscar, Ramires and Willian made the cut.

Lucas Leiva was included on the seven-man standby list but fellow Liverpool midfielder Phillipe Coutinho has not been picked.

Tottenham's Paulinho and fellow midfielder Fernandinho, of Manchester City, are in the squad.

Fernandinho, 28, has only featured only once for the national side since February 2012, scoring his first international goal in a friendly against South Africa in March.

As well as Lucas, Paris St-Germain midfielder Lucas Moura and Bayern Munich defender Rafinha were also on the standby list.

The five-time world champions face Panama in a friendly on 3 June.

Scolari's side will then conclude their preparations with a warm-up match against Serbia in Sao Paulo three days later.

Brazil face Croatia, Mexico and Cameroon in Group A of the tournament.