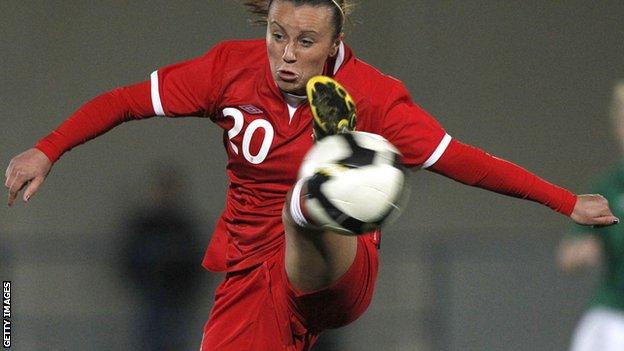 Bristol Academy striker Harding, 25, says the team are keen to make up for dropping two points in the 1-1 draw with Ukraine in their last match.

"We need to go and get a win there and then we can look ahead to the other games," she said.

"I think we've made a tough task for ourselves to win every game, but I think with the girls in this team and the squad... we can get at least second and even fight for first place.

"We were disappointed to not get the win against Ukraine, I think we deserved the three points and everyone at that game would have said the same.

"But to be disappointed with a point against one of the top teams to qualify for major championships before shows what a long way we have come."

The result against Ukraine leaves Wales on 10 points from five games, three ahead of Ukraine who have played only three matches.

Wales' only defeat in the tournament so far was 2-0 loss against England on 26 October 2013.

Manager Jarmo Matikainen's team followed that up a month later with an impressive 3-0 away win over Montenegro and a 5-1 success in Turkey before the set-back against Ukraine.

England are odds-on favourites to win the group, but the team finishing second could have a chance to qualify for the finals in Canada through a play-off.

And Harding believes that should be Wales' lowest target.

"I think it's realistic to fight for second [place] and if we can get a point or get something from England when we next play them then that would be a massive achievement for Welsh football," she added.