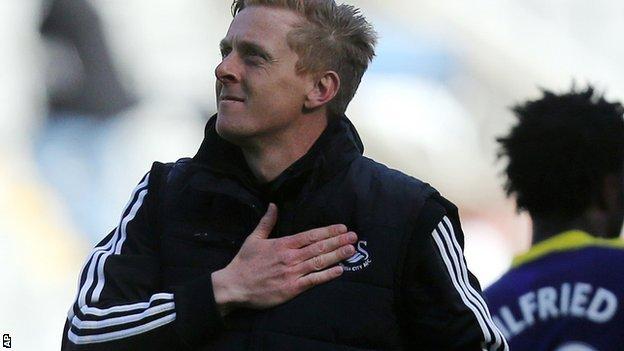 Garry Monk has been appointed Swansea City manager on a permanent basis.

Monk took the reins temporarily - under the title of head coach - after Michael Laudrup was sacked in February.

The 35-year-old, who has guided the club to Premier League safety with two games to spare, has been given a three-year contract and will be assisted by current coach Josep Clotet.

"Garry represents all the strong values we hold so dearly as a football club," said chairman Huw Jenkins.

"Everyone is looking forward to working with him."

The former defender made 260 appearances for the club, scoring seven goals, before retiring as a player, with the Capital One Cup defeat at Birmingham in September turning out to be his final game.

Last season he lifted the Capital One trophy with Ashley Williams after the Swans beat Bradford 5-0 to win their first major piece of silverware.

Swansea beat Cardiff 3-0 at home in Monk's first game as head coach and Swansea have won four, drawn four and lost eight in all competitions since Monk took charge 16 games ago.

The Swans are currently 13th in the Premier League after losing 1-0 to Southampton at the Liberty Stadium on Saturday, with one match still to come this season.

Jenkins told the club's website that the Swansea board "unanimously agreed that the timing was right for Garry to be offered the job on a permanent basis".

"As we look forward to our fourth season in the Premier League, we all agreed that we needed to get back to basics and reinforce the principles that have brought us success in recent years," added the chairman.

"We have all been impressed with his work-rate and commitment since taking over the reins in February and how he adapted in very difficult circumstances to secure the points we needed to remain in the top flight."