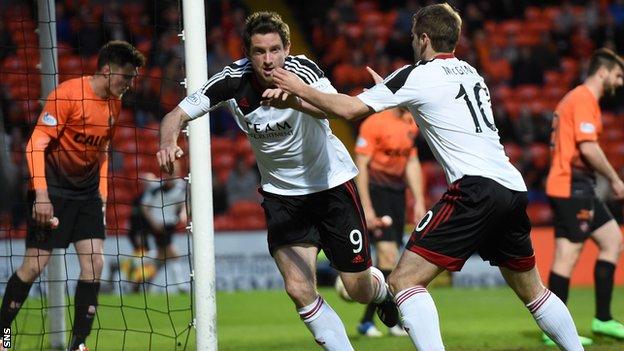 Striker Scott Vernon admits he remains in the dark over his Aberdeen future, despite hitting a hat-trick to see off Dundee United on Tuesday.

The Englishman, 30, took his tally to nine goals for the season in the Dons' 3-1 triumph at Tannadice.

He is out of contract this summer after four years and has yet to be offered a new deal by manager Derek McInnes.

"I don't know what's happening next year - nothing has been said yet," Vernon told the club's website.

For the third goal, I didn't actually know Souttar was behind me. So my heart skipped a beat when I saw him run in

"The gaffer has got a few decisions to make with the boys who are out of contract and I'm one of them. I will just have to wait and see."

Vernon also bagged a treble as the Pittodrie men hammered Falkirk 5-0 in the League Cup in September.

But he was given a scare on Tuesday night when he rolled the ball towards an empty net for his third as United defender John Souttar made a desperate late bid to clear the ball off the line.

"For the third goal, I didn't actually know Souttar was behind me, so I just thought I had to tap it into the empty net," Vernon added.

"I didn't want to risk it by taking the leather off the ball because it was bobbling up a bit.

"So my heart skipped a beat when I saw him run in, but then I heard the fans go wild, so I was a bit relieved."