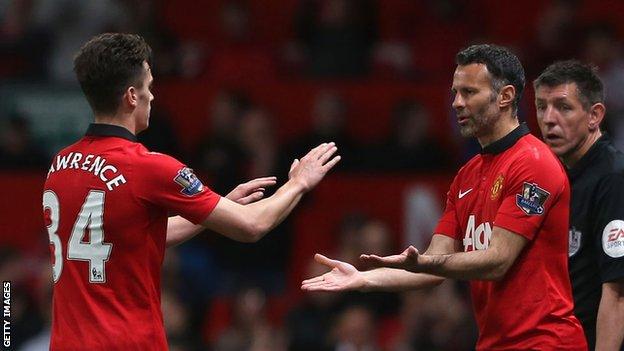 Manchester United's Tom Lawrence will be in Wales' extended 40-man training squad ahead of the friendly with the Netherlands on 4 June.

The 20-year-old forward made his first-team debut for Manchester United in the 3-1 win over Hull City on Tuesday.

"We've been well aware of his progress and his development for several years, and that's why he is being named in the pool for the Holland camp," he said.

The Wrexham-born player had spells at League One Carlisle and with Yeovil in the Championship.

His appearance for United means he has played in three separate divisions in one season.

He was replaced against Hull by fellow Welshman Ryan Giggs, who many believe was making his last appearance as a player for the Red Devils.

Lawrence said on Twitter: "Wow, what a feeling that was tonight and loved every minute of it! Coming off to be replaced by a legend like Giggs."

Roberts, a key member of Wales manager Chris Coleman's backroom staff, believes Lawrence has benefited from his spells in the lower divisions.

"It was great to see him make his debut at Manchester United," he said.

"He's had to go out on loan to get the experience and, while he's done that he's done well.

"But it's great to see players like Tom who we've identified coming through getting a chance with Manchester United and that augurs well for the future."

Lawrence is likely to be in action in a Wales shirt before the reduced senior squad for the Netherlands friendly is named.

Wales take on England Under-21 in a Uefa qualifying match on Monday, 19 May.