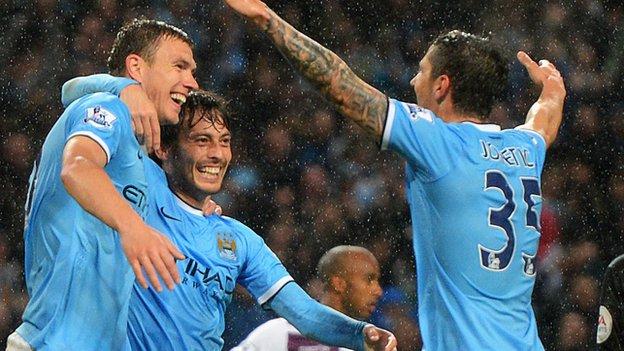 There was little sense of triumphalism and few proclamations about what might come the way of Manchester City.

The club may have moved to within touching distance of the Premier League title, but it seems the coronation will wait until the job is done.

As Manuel Pellegrini's side left the field after grinding Aston Villa into submission, thus closing in on a second top-flight crown in three seasons, it was noticeable how relatively measured the reaction was from players, staff and supporters alike. They have been here before. It is not over.

Contrasts will be drawn to Liverpool; the on-field emotion displayed when they beat City on 13 April, the off-field chants rolled out as the momentum built ("we're going to win the league"), and the on and off-field desolation witnessed following Monday's capitulation at Crystal Palace.

In addressing the media post-Villa, Pellegrini refused to compare how both clubs have handled the pressure - but his use of the word "maturity" to describe City's key strengths was telling.

This is a squad that was heavily questioned after winning just three of their opening six league matches and had spent only 11 days top of the table going into Wednesday's match.

It is also one containing plenty of familiar faces from the 2011-2012 campaign, when City trailed Manchester United by eight points with six games to go. They won them all, including an extraordinary finale against QPR, to become champions for the first time in 44 years.

City's matchday 18 against Villa featured 13 players who were involved that day against QPR, with Sergio Aguero still first-choice striker but currently out injured.

As his news conference went on, Pellegrini twice made mention of City's "personality" and "character" - qualities that must have been severely tested after the Anfield defeat and a home slip-up versus Sunderland left them six points behind then-leaders Liverpool with one game in hand.

They were back on song for the visit of West Brom, secured critical wins at Crystal Palace - where Liverpool and Chelsea saw their title bids derailed - and Everton, and then came Villa.

If Liverpool manager Brendan Rodgers accused Chelsea counterpart Jose Mourinho of "parking two buses" when the Blues came away from Merseyside with a 2-0 win at the end of April, then Villa boss Paul Lambert plonked a double-decker in the penalty area.

Despite setting up with Jordan Bowery as a lone striker, supported by Andreas Weimann, there were numerous occasions when the visitors positioned all 11 men behind the ball.

City could not break through the wall of maroon and white for over 60 minutes but, while frustration and anxiety swept around Etihad Stadium, it was striking how calm and composed Pellegrini remained in the technical area, and his players on the pitch.

Pellegrini was quick to praise his players for being "patient", but the Chilean himself deserves credit for a change in personnel and tactics. The introduction of Stevan Jovetic for James Milner forced Villa to refocus their evenly-spread resources into deep, central areas.

That finally gave David Silva and Yaya Toure space to operate in midfield and enabled full-backs Pablo Zabaleta and Aleksandar Kolarov to rampage into space. The results were stunning as Silva twice found Zabaleta in the right channel and his crosses led to Edin Dzeko scoring.

Two precious goals to the good, Pellegrini replaced Silva with Fernandinho to help close the result out. By comparison, when Liverpool went 3-0 up at Palace, Rodgers brought on a pair of attackers in Coutinho and Victor Moses as he sought further to reduce City's superior goal difference.

City went on to win 4-0 while Liverpool were ultimately, crushingly pegged back to 3-3, with former Reds midfielder Dietmar Hamann accusing his old team of "naivety".

It all leaves City two points ahead of Liverpool at the summit going into Sunday's final round of fixtures, when West Ham travel to the Etihad and Newcastle to Anfield.

Liverpool can only realistically lift the title if they win and City lose. A win for City guarantees them the trophy and a draw will effectively do the same because their goal difference is 13 better.

In such circumstances, it was hardly surprising to watch Pellegrini shelve his famously deadpan demeanour in favour of a slightly more animated version.

The 60-year-old claimed City's "attractive style of play" and unrelenting search for goals - the fourth against Villa, a stupendous effort from Toure, was their 100th in the league this season - meant as much to him as winning the Premier League would.

He does now "expect" his players to close out what would be his first league title in European football, but is taking nothing for granted. Which is why the celebrations are on ice.