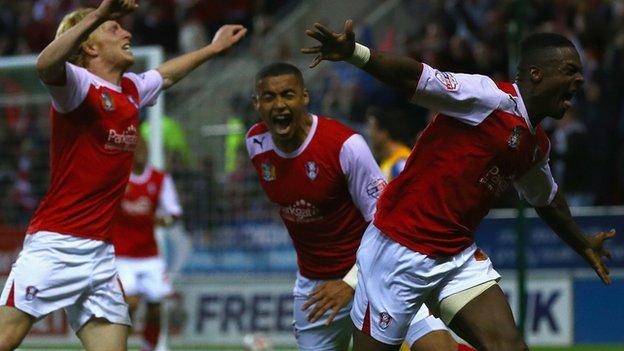 Rotherham will play Leyton Orient in the League One play-off final after coming from behind to beat Preston.

Following a 1-1 draw in the first leg, Paul Gallagher's free-kick gave the visitors the lead, but headers from Wes Thomas and Lee Frecklington put the Millers in front at the break.

The excellent Ben Pringle hit the bar for the hosts before Kieran Agard sealed it from close range.

Rotherham now have the chance to achieve back-to-back promotions.

The tie was evenly poised following the first meeting at Deepdale but Simon Grayson's side took the lead for the first time in the 16th minute when Gallagher's free-kick from the left was missed by everyone and bounced high into the roof of the Rotherham net.

It was from another Pringle free-kick that the home side equalised. Scott Wiseman pushed Alex Revell to the ground needlessly and the former Derby man's powerful delivery was met on the run by Thomas to give Rudd no chance.

Pringle was at the heart of much of the home side's play and he picked up his second assist of the night when his centre was superbly headed home by Frecklington from just inside the penalty area with 34 minutes gone.

Despite ending an enthralling half comfortably on top, Rotherham could still have gone in only level at the break.

Rotherham ended the regular league season having scored just two goals fewer than champions Wolves and they came close to a third of the night when Pringle's half-volley came back off the crossbar.

Preston spurned chances when Garner blasted over from a Gallagher cross and the winger headed wide when well placed, before former Everton forward Agard effectively ended the game as a contest.

Frecklington played a well-weighted chipped pass down the line for James Tavernier and the Newcastle loanee showed excellent control and poise before rolling a ball inside for Agard to convert his 26th goal of the season.

The deflated visitors pushed on in search of a route back into the game and both Jack King and Garner saw deflected efforts from outside the area hit a post.

But Steve Evans' side saw out six minutes of injury time to consign the Lancashire side to a fourth consecutive season in the third tier.

Preston boss Simon Grayson: "Football is about fine margins and things have not gone our way today.

"We've hit the post twice and both times it has gone out to one of their players. We didn't have much luck but we've lost to a fine team.

"The lads can be proud because they've had an excellent season. The football club is progressing and there is no doubt about that."

Rotherham boss Steve Evans: "It feels wonderful because we were many peoples' favourite to go back down at the start of the season.

"I think over the two legs we deserved to win the tie. It's my job to make sure we enjoy this tonight but tomorrow our focus will turn to Leyton Orient.

"We go to Wembley as the underdogs because they led the table for many months."