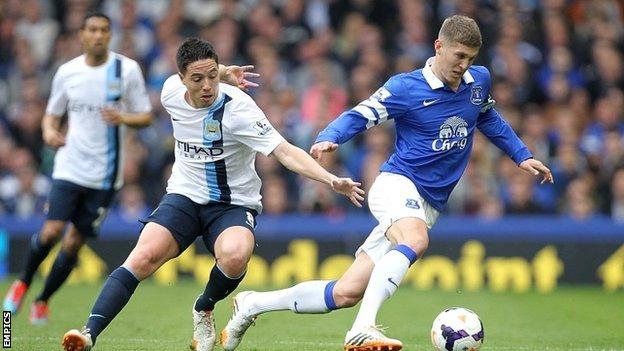 Stones, 19, could be in contention for a standby place when boss Roy Hodgson names a 30-man party on Monday.

"The one I might take a chance on because we are short in central defence is Stones," said Lineker. "I really like him and he has got a lot about him."

The BBC Match of the Day presenter added: "Sometimes central defenders need a little bit more experience than players in other positions because of the extra discipline and the nature of that particular role.

"But is he worth a gamble? Well, if Roy loses another one - if Jones doesn't make it for example - then what else have we got?"

Gary Cahill and Phil Jagielka are England's first-choice pairing, but Lineker does not think there are many more obvious contenders, arguing that Cardiff's Steven Caulker "struggles a little bit on the turn".

The former Everton striker, who scored 48 international goals in 80 appearances for England, added: "We are short in that position."

England under-21 international Stones was playing for Barnsley last season before a £3m move to Goodison Park in January 2013.

The Yorkshire youngster has made 26 appearances in an impressive season at the heart of Everton's defence and can also play at right-back.

Manchester United's Jones suffered a shoulder injury in Tuesday's Premier League win over Hull, while Tottenham defender Kyle Walker has been out for the past two months because of a pelvic problem.

Everton's Jagielka has only just returned from two months on the sidelines with a hamstring injury.

Hodgson will name his 30-man squad on Monday. It will include seven players on standby in case of injury.