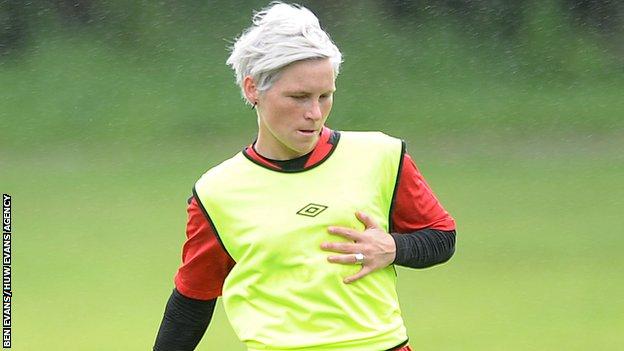 Captain Jess Fishlock says Wales Women will not be taking Montenegro lightly on Thursday despite the opposition propping up World Cup qualifying Group 6.

The Welsh team go into the match at Bangor in second place five points behind leaders England.

"You can't underestimate anyone. We only beat Belarus 1-0," said Fishlock.

"In this day and age football is not that way inclined - every game has its own challenges."

The team go into the match keen to make up for dropping two points in the 1-1 draw with Ukraine in their last match.

Only the seven group winners qualify automatically for the World Cup in Canada 2015. However, the four teams that come second and have the best records will compete in the play-offs for the last remaining qualifying place.

Fishlock is confident that Wales can challenge England and Ukraine for one of the top two spots.

She said: "I think it will be between the three of us who gets first and who gets second. We have put ourselves in a great position, but we have to focus on ourselves.

"It's a huge game [against Montenegro] and every game we play now is going to be huge.

"We have got to keep taking strides really in the right direction, that's what we have been doing since the start of the campaign.

"The games are coming thick and fast and we have got to keep progressing in the right way.

"I think [top spot is still realistic]. We have only lost one game and that was against England.

"I completely believe we can beat them and take points off them."

Manager Jarmo Matikainen's team followed that up a month later with an impressive 3-0 away win over Montenegro and a 5-1 success in Turkey before the set-back against Ukraine.