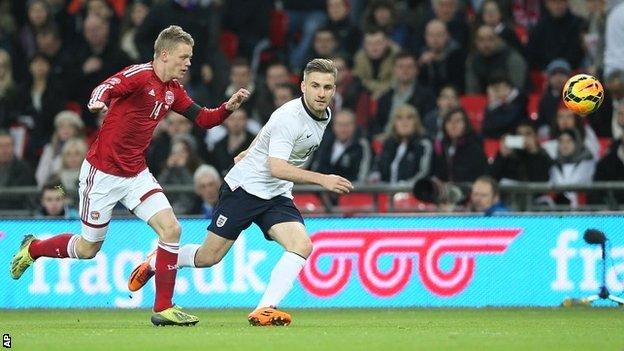 Southampton's Shaw, 18, made his England debut in March while Cole, 33, has 107 England caps despite limited league starts for Chelsea this season.

Le Saux says Shaw's "composure and undoubted quality" and his age could give him the edge over Cole.

Everton left-back Leighton Baines is likely to be first choice in Brazil.

"You still have to pick your best team but ultimately there has to be one eye on the future as well," said Le Saux.

"From Cole's point of view, while he has the pedigree, you have to ask if he has played enough football at Chelsea this season - and whether or not that is a signal he is coming to the end of a magnificent career at the highest level.

"Chelsea boss Jose Mourinho has been picking a right-back, Cesar Azpilicueta, ahead of him for most of the season and the question is why?

"With Luke Shaw's arrival in the Premier League, his composure and undoubted quality - and the opportunity he has to learn so much from the players around him during the tournament - I wonder if that would give him the edge."

Cole, who played at the 2002, 2006 and 2010 World Cups, has been out of favour with Mourinho this season, making one substitute appearance in three months from 26 January this year.

But despite being out of contract at the end of the season, he has since returned to the Blues side, impressing Le Saux in the 2-0 Premier League win at Liverpool and the goalless Champions League semi-final first leg against Atletico Madrid.

Former Chelsea and Southampton left-back Le Saux, who earned 36 caps and played in the 1998 World Cup, added: "It's a nice problem for Roy Hodgson to have three quality left-backs but, certainly, Leighton Baines has become the first choice with the season he has had and I think Luke Shaw has more to gain as an understudy.

"Cole's experience is a very valuable asset for Roy Hodgson and the England team, but you have to look at Luke Shaw and ask what he would gain from the experience of going to a World Cup.

"I can see advantages to both of them but I would take Luke Shaw as back-up to Leighton Baines."

Hodgson names his 23-man squad on Monday and will pick seven players on standby in case of injuries before England's first game in Brazil against Italy on 14 June.

But he said recently he has known for some time who he will select, adding: "If there are young players in the squad, it will be because they can do a job now."