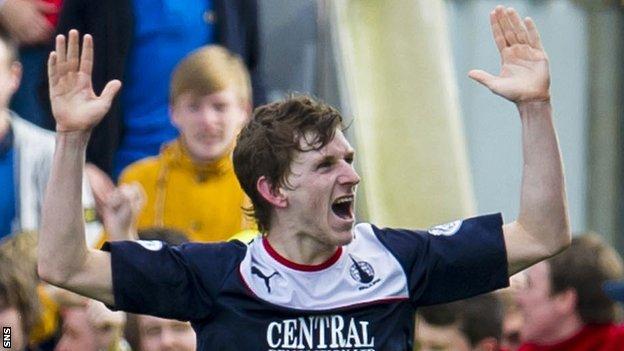 A late extra-time winner brought jubilation for Falkirk and agony for Queen of the South as the Bairns took one step closer to the Premiership.

The visitors hit the front through Bob McHugh, but Falkirk made it 2-1 on the day thanks to efforts from Rory Loy and Craig Sibbald

And as penalties seemed imminent, Blair Alston bagged the winner for Falkirk.

The Bairns now face Hamilton Academical over two legs in the play-off semi-final.

The winner of that tie will face Hibernian in the final.

Jim McIntyre's Queens held a 2-1 advantage from the first leg but their goalkeeper Zander Clark was under pressure from the off as Loy and Connor McGrandles looked lively for Bairns.

The Palmerston side grew into the game and after a free-kick from Iain McShane, Falkirk goalkeeper Michael McGovern produced a brilliant fingertip save.

And McHugh got his third goal of the tie out of nothing. A cross into the box cannoned off Will Vaulks and on-loan Motherwell player McHugh was on hand to fire home on the volley.

Johnny Flynn should have levelled before the break but blasted over from a good position.

Falkirk kept the pressure on after the interval and restored parity on the day through Loy's sweeping strike after dogged work by Flynn.

And the Bairns got the crucial second when Sibbald netted with the deftest of touches.

He took advantage of an inviting delivery and, despite Queens' protests that there had been a foul on their goalkeeper, Sibbald played on and glanced a header into the corner.

The aggregate score was now level and Queens' Daniel Carmichael rattled an effort off the post before McHugh headed over from just yards out.

In extra-time, Loy had his head in his hands when, after a fine passage of play, he rounded Clark only to take one touch too many and allowed the goalkeeper time to get back and block.

Carmichael then went close with a right-foot effort and it looked like spot-kicks would be needed to separate the sides.

But up popped Alston to fire home from Scott Shepherd's assist to send the home fans into a frenzy.