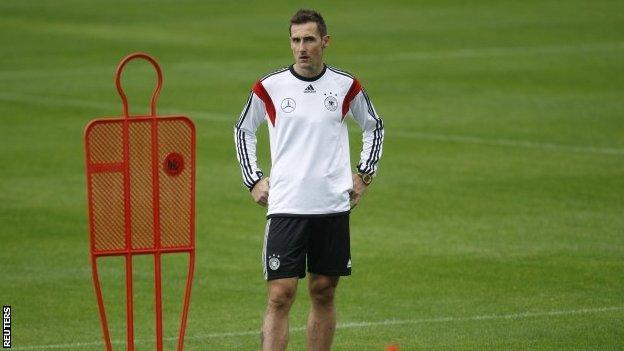 Record-chasing Miroslav Klose will go to his fourth World Cup after being named in Germany's final 23-man squad.

Hoffenheim forward Kevin Volland was cut from the provisional squad, meaning Arsenal's Lukas Podolski is their only other option as a striker.

Klose scored five times in the 2002 and 2006 World Cup finals and four in the 2010 tournament in South Africa.

The pair are also joint top scorers for Germany with 68 goals each.

Klose has been restricted to 22 appearances for Lazio this season but has scored seven times in Serie A and coach Joachim Low expects him to make an impact in Brazil.

Low has named four players from the Premier League in his squad, including the Arsenal trio of defender Per Mertesacker, midfielder Mesut Ozil and forward Podolski. Chelsea midfielder Andre Schurrle completes the English-based quartet.

Sampdoria defender Shkodran Mustafi was dropped from the provisional 30-man squad, along with Volland and Borussia Dortmund left-back Marcel Schmelzer.

Bayer Leverkusen midfielder Lars Bender pulled out of the squad with a thigh injury.

Three-time winners Germany, who were last world champions as West Germany in 1990, are in Group G along with Portugal, Ghana and the United States.