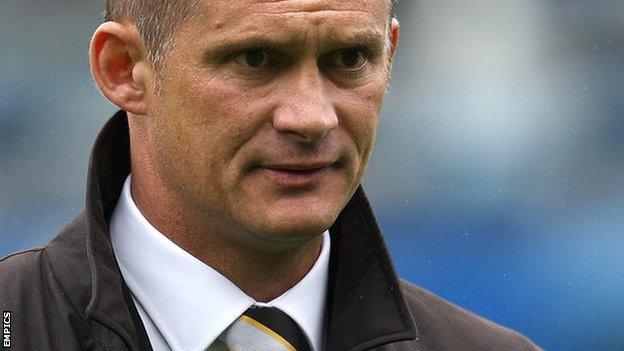 Manager Lee Sinnott says it is "massively important" for Altrincham to return to the Conference Premier.

Sinnott's side, who finished third in the table, host Guiseley in Saturday's Conference North play-off final.

Victory will see the club return to the top tier of non-league football for the first time since the 2010-11 season.

"Altrincham have played there on and off for a few years and obviously we want to make that step back now," the 48-year-old told BBC Radio Manchester.

"It's been three seasons since a cruel final day when they got relegated and this new squad is out to put that right."

Altrincham dropped into the Conference North in April 2011 after losing 4-3 to Eastbourne in their final game, having come back from 3-0 down to level at 3-3, and knowing a win would have been enough for them to survive.

Sinnott took over at Moss Lane a month later and has led the club to the play-offs twice in three seasons.

Altrincham ended the regular campaign three points and two places above Guiseley and, after beating Hednesford in the play-off semi-final, Sinnott hopes playing the final at their home ground with prove to be an advantage.

"The more noise the fans make, the better," added Sinnott, who had a 10-month spell as a Football League manager with Port Vale in 2007-08.

"Our supporters were fantastic in the home leg of the semi-final. It does have an effect on our players."