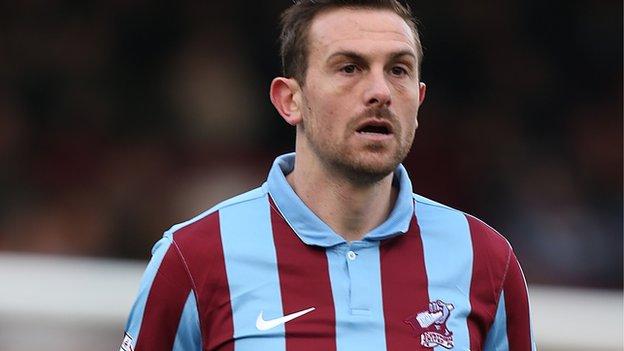 Scunthorpe United have released eight players after winning automatic promotion to League One.

Striker Paul Hayes, 30, joined the club for a third time in December and scored four goals in 16 games.

And youngsters Jamie Wootton and George Grayson have been told they will not be receiving new contracts.

Midfielder McAllister, 26, made 39 league appearances after joining in the summer after a short spell with Scottish side Cowdenbeath.

Defender Mirfin, 29, and fellow centre-back Cananvan, 23, missed just one and two games respectively while full-back made Eddie Nolan, 25, made 40 appearances in the Iron defence

Veteran striker Burton, 37, scored six goals in 33 appearances while full-back Dawson, 35, was reduced to just 22 appearances because of injury, but both have been offered new deals along with former Coventry winger McSheffrey, 31, who made 13 appearances after joining in January.