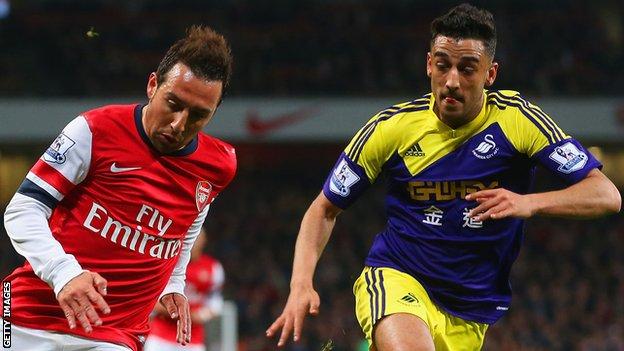 Wales and Swansea left-back Neil Taylor will meet manager Garry Monk at the end of the season to discuss his future at Liberty Stadium.

Taylor, 25, has struggled to hold down a regular starting place this season.

The Swans rejected bids from Fulham and West Ham for Taylor in January 2014 and he is uncertain where he will be next term.

Taylor says his future is in the hands of others and that he does not know what it holds.

Taylor has started 17 matches for the Swans and come off the bench to play five times so far this season.

Nine of his appearances have been in the Premier League.

He has started just two of Garry Monk's Premier League matches in charge away to Liverpool and Arsenal.

He said: "Obviously I'll sit down with Monks [Garry Monk] and like every player does at the end of the season, we'll have a chat."

Taylor is back to full fitness after being dogged by injury problems for the last few seasons.

The 18-times capped Wales defender suffered multiple fractures and a dislocation to his ankle in September 2012.

Ben Davies emerged at the Liberty Stadium during Taylor's enforced absence as his main challenger for club and country.

Taylor, who played for Great Britain in the 2012 London Olympics, says he wants to play regularly.

"Obviously I want to play games. That's the way it is," said Taylor.

"But also we've played a good number of games this season as a club so I've got those games."

The Swans' final Premier League match is on Sunday away at Sunderland.

Monk's side secured top flight safety with two games left thanks to back-to-back wins against Newcastle and Aston Villa.

Taylor says he has been focused in the club's efforts to stay up and will think about his future once the season has finished.

"Obviously you have to think about yourself and the club," said Taylor.

"But I think more importantly the club is where we want it to be in the Premier League and everybody made sure that happened.

"I don't think any player has the right to think about themselves until the season is over," said Taylor.

"That's the way it is. You have to think about the club first.

"They pay your wages and this club is good to a lot of people, myself included."