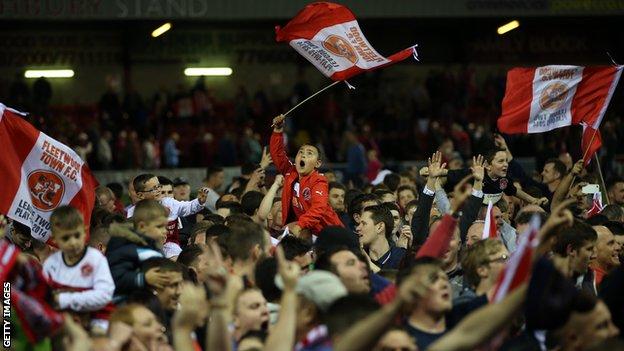 Fleetwood reached the League Two play-off final, beating York 1-0 on aggregate after a 0-0 draw at Highbury.

At the other end, Nick Pope saved brilliantly from Antoni Sarcevic to keep York in the tie.

But the Minstermen could not force it into extra-time and Fleetwood will face either Southend or Burton on 26 May.

When Fleetwood chairman Andy Pilley took over the club in 2003, they were playing in the North West Counties Football League Premier Division and their crowds hovered around the 100 mark.

Victory at Wembley will see the Cod Army achieve a sixth promotion in 10 seasons and go into the third tier of English football for the first time in their history.

York had gone 17 games unbeaten heading into the play-offs but their defeat at Bootham Crescent on Monday, inflicted upon them by former York winger Matty Blair, ended their hopes of a second promotion in three years.

And while Nigel Worthington's men failed to test Maxwell as often as they would have anticipated in a feisty second leg, they threatened enough make it a nervous 90 minutes for a sell-out crowd of 5,194, before the home supporters could celebrate a trip to Wembley.

Both sides failed to direct any of their early chances on target, with Josh Morris and Iain Hume firing over for Fleetwood, while skipper Russ Penn did likewise for the visitors.

Maxwell was called upon twice to preserve Fleetwood's one-goal lead in the tie - first stopping Coulson's powerful effort from 12 yards and then flying to his right to keep out Lowe's looping header.

The home side struggled to impose themselves on the game during the first 45 minutes, but almost took the lead in stoppage time at the end of the first period when Mark Roberts met Steven Schumacher's driven free-kick, but his header drifted wide.

Will Hayhurst's driven cross evaded the onrushing Adam Reed as York looked to step up the pace after the break.

As the game began to open up, Fleetwood finally found some fluidity and after Pope's excellent save from Sarcevic, Nathan Pond headed over from the resulting corner.

Left-back Charlie Taylor drilled wide in the dying minutes as the hosts looked to close out the match, while a curling effort from substitute Ryan Jarvis, calmly claimed by Maxwell, was as close as the visitors came to forcing an extra 30 minutes.

"Getting to Wembley is the next step we wanted to take. It's not the target, but it's the next step to our target, and we're really pleased to get there.

"We made it hard for ourselves and York made it difficult. It was a proper play-off game.

"When it came down to the crunch, the defenders and the goalkeeper were fantastic over the two legs and especially tonight. It was one for men and that's what we saw."

"I thought it was a tremendous effort from start to finish. We had energy, commitment and never stopped. That's the type of group we've got.

"As the manager of the football club, I'm very proud of them.

"There were many half-chances tonight when the ball was in and around the box and it's got to fall to you. Sometimes you've got to make that happen.

"Fleetwood are a good side and we wish them well in the final."