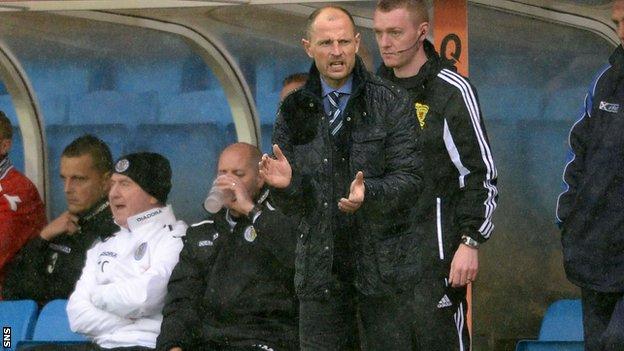 And, despite needing just a point to avoid the relegation play-off, Johnston will go for the victory.

Killie, who beat St Mirren 1-0 on Wednesday, and Hibs are the only sides who can finish 11th in the table.

"If we produce a performance like we did the other night we'll win more games than we lose," Johnston said.

"When you look at the performance against St Mirren, it was full of energy and desire, and that's the kind of performance we need again to get any sort of result against Hibs," Johnston added.

"You could see the confidence the other night. It's amazing the difference the supporters made, getting behind the team, and we'll need their support again.

"You've obviously got to go and try to win the game, the last thing you want to do is invite pressure on yourself. When you're defending for 90 minutes it's really difficult to keep a clean sheet. You're not going to go gung ho, but we've got the players to hurt Hibs."

Johnston's side edged out Saints thanks to a Kris Boyd goal, ensuring their fate is in their own hands at Easter Road.

And while the Hibs fans have been critical of Terry Butcher's side in recent games, Johnston is expecting a terrific atmosphere.

"I'm sure they realise the importance of this game and the fans will get right behind Hibs," Johnston added.

"I'm sure we'll bring a lot of supporters so it should be a fantastic occasion and a really good atmosphere, one the players should enjoy playing in.

"They're difficult games for players, it's a nervous occasion, but we've got good experience in our team, guys that have played at the highest level and they're used to pressure games."