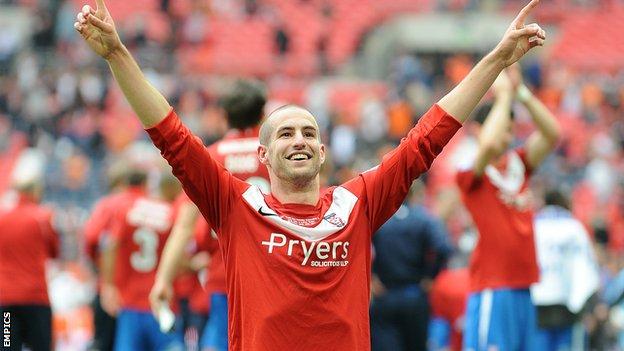 Fleetwood winger Matty Blair is hopeful of a good reception when the Cod Army face his former club York in their League Two play-off semi-final.

Blair, 23, scored the goal that sealed York's return to League Two in 2012, eight years after the club had been relegated to the Conference.

"I've got a lot of friends at the club and I was proud to be a part of the club," he told BBC Radio Lancashire.

Matty Blair's father, Andy, was an unused substitute when Aston Villa won the European Cup in 1982.

Thirty years later, he broke a bone in his foot while celebrating as his son scored against Luton to send York to the FA Trophy final at Wembley.

The first leg of the semi-final takes place at Bootham Crescent on Saturday.

"I think I was liked and I'd like to think I'd get a good reception, but if they want to give me a bad one, it's not going to affect the way I feel about them," added Blair, who joined Fleetwood at the start of the current season.

"It's a very big game, not just for me personally, but for Fleetwood Town. To achieve that goal from the start of the season and get promotion would be an incredible achievement."

Blair scored one of York's goals when Gary Mills' side won the FA Trophy at Wembley in May 2012, and then netted the winner at the same venue eight days later as the Minstermen won promotion back into the Football League via the play-offs.

Fleetwood, who were playing in the ninth tier of English football as recently as 2004-05, finished fourth in League Two, five points from an automatic promotion spot.

"The players are fully aware of the positives of winning promotion," said manager Graham Alexander. "They have been really focused on that target over the past couple of months.

"The target was promotion. Whether that's finishing in the top three or through the play-offs, it's still the same target.

"We're in good shape and good form, and I think the players are excited by the prospect of playing in two high-intensity, high-stakes games."