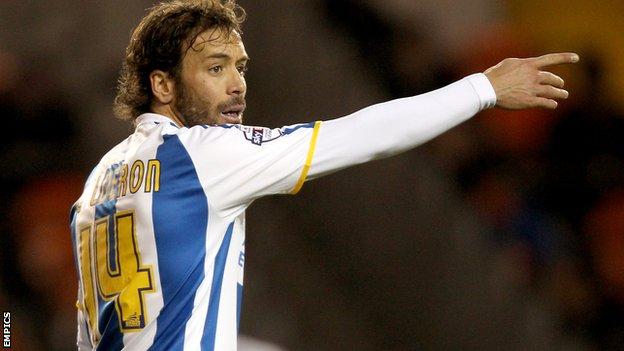 Defender Inigo Calderon says Brighton must be patient going into the second leg of their Championship play-off semi-final, despite trailing Derby.

The Seagulls lost 2-1 at the Amex Stadium on Thursday and will play the second leg on Sunday.

"They can hurt us again on the counter attack and we have to keep an eye on that," the 32-year-old told BBC Sussex.

"We don't have to go crazy as it is 90 minutes and just one goal. We only need one goal to draw it."

The Spanish right-back added: "We know they like to play on the break and are really good doing that.

"I just want to be focused on ourselves. We know we have to score. We have a chance and we will go there to take it."

The Sussex club took the lead midway through the first half through on-loan forward Jesse Lingard but Derby went in ahead at the break.

The Rams levelled thanks to Chris Martin's penalty and then seized the initiative after an own goal from Brighton goalkeeper Tomasz Kuszczak, with Martin's shot hitting the crossbar and deflecting in off the Poland international's back.

"We started really well and scored the first goal, which is really important," Calderon said.

"After we stopped a bit, thinking we had done the most difficult thing already.

"Suddenly they had a break and it was a penalty. After that we were in shock.

"Then they scored and it was a bit of luck as they hit the bar and it went in off Tomasz's back. We didn't have the kind of luck you need in these games."

Brighton dominated the second half but were unable to find a breakthrough, as Rams keeper Lee Grant denied Leonardo Ulloa, Lingard and Stephen Ward.

"The second half was a bit complicated as we knew we couldn't concede another goal as it would be game over," Calderon said.

"At the same time we had to try and push and get at least a draw.